Châtelet is a station on lines 1, 4, 7, 11 and 14 of the Paris Métro in the centre of medieval Paris and the 1st arrondissement. The station is made up of two parts connected by a long corridor: 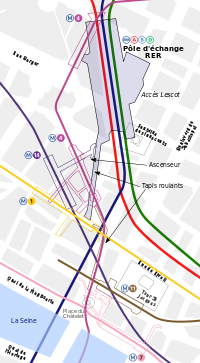 The station was opened on 6 August 1900, three weeks after trains began running on the original section of line 1 between Porte de Vincennes and Porte Maillot on 19 July 1900. The line 4 platforms were opened on 21 April 1908 as part of the original section of the line from Porte de Clignancourt to Châtelet. It was the southern terminus of line 4 until the opening of the connecting section of the line under the Seine to Raspail on 9 January 1910.

The line 7 platforms were opened on 16 April 1926 as part of the line's extension from Palais Royal to Pont Marie with the name Pont Notre-Dame-Pont au Change. It had no direct connection with Châtelet. On 15 April 1934 a connecting corridor was opened to the platforms of lines 1 and 4 and the line 7 station was renamed. The line 11 platforms were opened near the line 7 platforms on 28 April 1935 as part of the original section of the line from Châtelet to Porte des Lilas.

On 9 December 1977 the Châtelet – Les Halles RER station was opened with a connecting corridor with a moving walkway to Châtelet. The line 14 platforms were opened near the line 1 and 4 platforms on 15 October 1998 as part of the original section of the line from Madeleine to Bibliothèque François Mitterrand. On 7 and 8 March 2009 the line 1 platforms were restored during the automation of line 1, including the installation of platform screen doors.

It is named after the Place du Châtelet, which is named after the Grand Châtelet, a castle over the northern approach to the old Pont au Change over the Seine to the Île de la Cité, which was demolished by Napoléon in 1802. Châtelet is a medieval French term for barbican, a small castle that commands (overlooks) a bridge or defile.[1]