Fluorite (also called fluorspar) is a halide mineral composed of calcium fluoride, CaF2. It is an isometric mineral with a cubic habit, though octahedral and more complex isometric forms are not uncommon. Crystal twinning is common and adds complexity to the observed crystal habits.

The word fluorite is derived from the Latin root fluo, meaning "to flow" because the mineral is used in iron smelting to decrease the viscosity of slags at a given temperature. This increase in fluidity is the result of the ionic nature of the mineral. The melting point of pure calcium fluoride is 1676 K.

In 1852 fluorite gave its name to the phenomenon of fluorescence, which is prominent in fluorites from certain locations, due to certain impurities in the crystal. Fluorite also gave the name to its constitutive element fluorine.[2]

Fluorite is a colorful mineral, both in visible and ultraviolet light, and the stone has ornamental and lapidary uses. Industrially, fluorite is used as a flux for smelting, and in the production of certain glasses and enamels. The purest grades of fluorite are a source of fluoride for hydrofluoric acid manufacture, which is the intermediate source of most fluorine-containing fine chemicals. Optically clear transparent fluorite lenses have low dispersion, so lenses made from it exhibit less chromatic aberration, making them valuable in microscopes and telescopes. Fluorite optics are also usable in the far-ultraviolet range where conventional glasses are too absorbent for use.

Fluorite derives from the Latin noun fluo, meaning a stream or flow of water. In verb form this was fluor or fluere, meaning to flow. The mineral fluorite was originally termed fluorospar and was first first discussed in print in a 1530 work Bermannus, sive de re metallica dialogus [Bermannus; or a dialogue about the nature of metals], by Georgius Agricola, as a mineral noted for its usefulness as a flux.[5][6] The compounds used as flux (from the Latin noun fluxus, a wash or current of water) are used in metallurgy for a number of different purposes, but in smelting they are used to lower the melting point and promote the fusion of metals and minerals in slag. Agricola, a German scientist with expertise in philology, mining, and metallurgy, named fluorspar as a Neo Latinization of the German Flussespar from Flusse (stream, river) and "Spar" (meaning a nonmetallic mineral akin to gypsum, spærstān, spear stone, referring to its crystalline projections).

A closeup of fluorite surface

Fluorite may occur as a vein deposit, especially with metallic minerals, where it often forms a part of the gangue (the surrounding "host-rock" in which valuable minerals occur) and may be associated with galena, sphalerite, barite, quartz, and calcite. It is a common mineral in deposits of hydrothermal origin and has been noted as a primary mineral in granites and other igneous rocks and as a common minor constituent of dolostone and limestone.

Fluorite is a widely occurring mineral which is found in large deposits in many areas. Notable deposits occur in China, Germany, Austria, Switzerland, England, Norway, Mexico, and both the Province of Ontario and Newfoundland and Labrador in Canada. Large deposits also occur in Kenya in the Kerio Valley area within the Great Rift Valley. In the United States, deposits are found in Missouri, Oklahoma, Illinois, Kentucky, Colorado, New Mexico, Arizona, Ohio, New Hampshire, New York, Alaska, and Texas. Fluorite has been the state mineral of Illinois since 1965. At that time, Illinois was the largest producer of fluorite in the United States, but the last fluorite mine in Illinois was closed in 1995.[7]

One of the largest deposits of fluorspar in North America is located in the Burin Peninsula, Newfoundland, Canada. The first official recognition of fluorspar in the area was recorded by geologist J.B. Jukes in 1843. He noted an occurrence of "galena" or lead ore and fluorite of lime on the west side of St. Lawrence harbour. It is recorded that interest in the commercial mining of fluorspar began in 1928 with the first ore being extracted in 1933. Eventually at Iron Springs Mine, the shafts reached depths of 970 feet (300 m). In the St. Lawrence area, the veins are persistent for great lengths and several of them have wide lenses. The area with veins of known workable size comprises about 60 square miles (160 km2).[9][10][11]

Cubic crystals up to 20 cm across have been found at Dalnegorsk, Russia.[12] The largest documented single crystal of fluorite was a cube 2.12 m in size and weighed ~16 tonnes.[13]

One of the most famous of the older-known localities of fluorite is Castleton in Derbyshire, England, where, under the name of Derbyshire Blue John, purple-blue fluorite was extracted from several mines or caves, including the famous Blue John Cavern. During the 19th century, this attractive fluorite was mined for its ornamental value. The name derives from French "bleu et jaune" (blue and yellow) characterising its color. The mineral Blue John is now scarce, and only a few hundred kilograms are mined each year for ornamental and lapidary use. Mining still takes place in both the Blue John Cavern and the nearby Treak Cliff Cavern.[14]

Recently discovered deposits in China have produced fluorite with coloring and banding similar to the classic Blue John stone.[15]

George Gabriel Stokes named the phenomenon of fluorescence from fluorite, in 1852.[16][17]

Many samples of fluorite exhibit fluorescence under ultraviolet light, a property that takes its name from fluorite.[18] Many minerals, as well as other substances, fluoresce. Fluorescence involves the elevation of electron energy levels by quanta of ultraviolet light, followed by the progressive falling back of the electrons into their previous energy state, releasing quanta of visible light in the process. In fluorite, the visible light emitted is most commonly blue, but red, purple, yellow, green and white also occur. The fluorescence of fluorite may be due to mineral impurities such as yttrium, ytterbium, or organic matter in the crystal lattice. In particular, the blue fluorescence seen in fluorites from certain parts of Great Britain responsible for the naming of the phenomenon of fluorescence itself, has been attributed to the presence of inclusions of divalent europium in the crystal.[19]

The color of visible light emitted when a sample of fluorite is fluorescing is dependent on where the original specimen was collected; different impurities having been included in the crystal lattice in different places. Neither does all fluorite fluoresce equally brightly, even from the same locality. Therefore, ultraviolet light is not a reliable tool for the identification of specimens, nor for quantifying the mineral in mixtures. For example, among British fluorites, those from Northumberland, County Durham, and eastern Cumbria are the most consistently fluorescent, whereas fluorite from Yorkshire, Derbyshire, and Cornwall, if they fluoresce at all, are generally only feebly fluorescent. 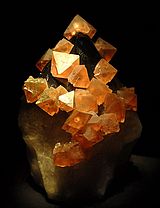 Fluorite crystals on display at the Cullen Hall of Gems and Minerals, Houston Museum of Natural Science

Fluorite comes in a wide range of colors and has subsequently been dubbed "the most colorful mineral in the world". The most common colors are purple, blue, green, yellow, or colorless. Less common are pink, red, white, brown, black, and nearly every shade in between. Color zoning or banding is commonly present. The color of the fluorite is determined by factors including impurities, exposure to radiation, and the size of the color centers.

Natural fluorite mineral has ornamental and lapidary uses. Fluorite may be drilled into beads and used in jewelry, although due to its relative softness it is not widely used as a semiprecious stone.

There are three principal types of industrial use for natural fluorite, corresponding to different grades of purity. Metallurgical grade fluorite (60–85% CaF2), the lowest of the three grades, has traditionally been used as a flux to lower the melting point of raw materials in steel production to aid the removal of impurities, and later in the production of aluminium. Ceramic grade fluorite (85–95% CaF2) is used in the manufacture of opalescent glass, enamels and cooking utensils. The highest grade, "acid grade fluorite" (97% or more CaF2), accounts for about 95% of fluorite consumption in the US where it is used to make hydrogen fluoride and hydrofluoric acid by reacting the fluorite with sulfuric acid.[21]

Internationally, acid-grade fluorite is also used in the production of AlF3 and cryolite (Na3AlF6), which are the main fluorine compounds used in aluminium smelting. Alumina is dissolved in a bath that consists primarily of molten Na3AlF6, AlF3, and fluorits to allow electrolytic recovery of aluminium. Fluorine losses are replaced entirely by the addition of AlF3, the majority of which will react with excess sodium from the alumina to form Na3AlF6.[21]

Synthetically grown fluorite (calcium fluoride crystal) is used instead of glass in some high-performance telescopes and camera lens elements.

Fluorite has a very low dispersion, so lenses made from it exhibit less chromatic aberration than those made of ordinary glass.[22] In telescopes, fluorite elements allow crisp images of astronomical objects even at high magnifications. Canon Inc. produces synthetic fluorite crystals that are used in their more expensive telephoto lenses.

Exposure tools for the semiconductor industry make use of fluorite optical elements for ultraviolet light at wavelengths of about 157 nanometers. Fluorite has a uniquely high transparency at this wavelength. Fluorite objective lenses are manufactured by the larger microscope firms (Nikon, Olympus, Carl Zeiss and Leica). Their transparence to ultraviolet light enables them to be used for fluorescence microscopy.[23] The fluorite also serves to correct optical aberrations in these lenses. Nikon has previously manufactured at least one all-fluorite element camera lens (105 mm f/4.5 UV) for the production of ultraviolet images.[24]