She rose to fame in the late 1990s following her roles in 2 Days in the Valley, Mighty Joe Young, The Devil's Advocate and The Cider House Rules. She received critical acclaim and an Academy Award for her portrayal of serial killer Aileen Wuornos in the film Monster, for which she became the first African to win an Academy Award in a major acting category. She received another Academy Award nomination for her performance in North Country.

Theron was born in Benoni, in the then Transvaal Province of South Africa, the only child of Gerda Jacoba Aletta (née Maritz; born 27 January 1953) and Charles Jacobus Theron (27 November 1947 – 21 June 1991).[1] Her mother is of German descent and her father was of Occitan and Dutch ancestry; Theron is descended from early Huguenot settlers, and Boer War figure Daniel Theron was her great-great uncle.[2] "Theron" is an Occitan surname (originally spelled Théron) pronounced in Afrikaans as "Tronn", although she has said that the way it is pronounced in South Africa is "Thrown".[3] She changed the pronunciation when she moved to the U.S.

Although fluent in English, her first language is Afrikaans.[4][5] She grew up on her parents' farm in Benoni, near Johannesburg.[6] Her father died on 21 June 1991, after he was shot by Theron's mother. Theron's father, who suffered from alcoholism,[6] physically attacked her mother and threatened both women while being drunk. The shooting was legally adjudged to have been self-defence and her mother faced no charges.[2][7]

Theron attended Putfontein Primary School (Laerskool Putfontein). At the age of thirteen, Theron was sent to boarding school and began her studies at the National School of the Arts in Johannesburg.[6]

At the age of sixteen, Theron travelled to Milan on a one-year modelling contract,[6] after winning a local competition. She went to New York with Pauline's Model Management. She decided to remain after her contract ended, attending the Joffrey Ballet School, where she trained as a ballet dancer. A knee injury closed this career path when Theron was 19.[8][9]

Unable to dance, Theron flew to Los Angeles on a one-way ticket her mother bought her.[8] During her early months there, she went to a bank to cash a cheque her mother had sent her to help with the rent. When the teller refused to cash it, Theron immediately started a shouting match with her.[6] Afterwards, a talent agent in line behind her handed her his business card and subsequently introduced her to some casting agents and also an acting school.[10][11] She later fired him as her manager after he kept sending her scripts for films similar to Showgirls and Species.[12] After several months in the city, she was cast in her first film part, a non-speaking role in the direct-to-video film Children of the Corn III (1995).[6] Her first speaking role was a supporting but significant part in 2 Days in the Valley.[6] Larger roles in widely released Hollywood films followed, and her career expanded in the late 1990s with box office successes like The Devil's Advocate (1997), Mighty Joe Young (1998), and The Cider House Rules (1999).[6] She was on the cover of the January 1999 issue of Vanity Fair as the "White Hot Venus".[13] 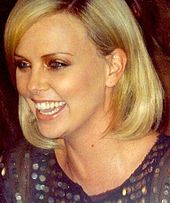 After appearing in a few notable films, Theron starred as the serial killer Aileen Wuornos in Monster (2003).[6] Film critic Roger Ebert called it "one of the greatest performances in the history of the cinema".[14] For this role, Theron won the Academy Award for Best Actress at the 76th Academy Awards in February 2004,[15] as well as the SAG Award and the Golden Globe Award.[16] She is the first South African to win an Oscar for Best Actress.[17] The Oscar win pushed her to The Hollywood Reporter's 2006 list of highest-paid actresses in Hollywood; earning $10,000,000 for both her subsequent films, North Country and Æon Flux, she ranked seventh, behind Halle Berry, Cameron Diaz, Drew Barrymore, Renée Zellweger, Reese Witherspoon and Nicole Kidman.[citation needed]

On 30 September 2005, Theron received her star on the Hollywood Walk of Fame.[17] In the same year, she starred in the financially unsuccessful science fiction thriller Æon Flux.[citation needed]

Theron received Best Actress Academy Award and Golden Globe nominations for her lead performance in the drama North Country.[15][16] Ms. magazine also honoured her for this performance with a feature article in its Fall 2005 issue.[citation needed] She also received the 2005 Spike Video Game Award for Best Performance by a Human Female for her voiceover work in the Æon Flux video game.[18][19]

In 2008 Theron was named the Hasty Pudding Theatricals Woman of the Year.[21] That year she also starred with Will Smith in Hancock, a film that grossed $227.9M in the U.S. and $396.4M internationally,[22] and in late 2008 she was asked to be a UN Messenger of Peace by the UN Secretary General Ban Ki-Moon.[23]

On 4 December 2009, Theron co-presented the draw for the 2010 FIFA World Cup in Cape Town, South Africa, accompanied by several other celebrities of South African origin. During rehearsals she drew an Ireland ball instead of France as a joke at the expense of FIFA, referring to Thierry Henry's handball controversy in the play off match between France and Ireland.[26][27] The stunt alarmed FIFA enough for it to fear she might do it again in front of a live global audience.[28]

As reported on Piers Morgan Tonight on 2 July 2011, Theron's movies have earned a combine total of 800 Million dollars.[citation needed]

Theron has been cast in the role of The Wicked Queen in Snow White and the Huntsman.[29]

Theron lives in the Los Angeles area. She separated from her partner of almost a decade, Irish actor Stuart Townsend (with whom she starred in the 2004 film Head in the Clouds as well as in the 2002 film Trapped), in January 2010.[30]

Theron became a naturalised citizen of the United States in May 2007.[31]

She signed with William Morris Endeavour in 2009 and is represented by CEO Ari Emanuel.[32]

While filming Æon Flux in Berlin, Germany, Theron suffered a herniated disc in her neck, which occurred as a result of her suffering a fall while filming a series of back handsprings. This required her to wear a neck collar for a month.[33]

In July 2009 Theron was diagnosed with a serious stomach virus, thought to be contracted while travelling outside the United States.[34] She was hospitalised at Cedars-Sinai Hospital and she finished convalescing in her own home.[35]

Having signed a deal with John Galliano in 2004, Theron replaced Estonian model Tiiu Kuik as the spokeswoman in the J'ADORE advertisements by Christian Dior.[36] Galliano has reputedly cited her as a muse and has been creating couture dresses for her to wear to formal red carpet events such as the Academy Awards and the Golden Globe Awards.[citation needed]

Theron is involved in women's rights organisations, and has marched in pro-choice rallies.[40]

Theron also is a supporter of animal rights and active member of PETA. She appeared in a PETA ad for their anti-fur campaign.[41] She is a supporter of marriage equality and attended a march to support that in Fresno, California, on 30 May 2009.

In July 2009 it was announced that Theron's Africa Outreach Project (CTAOP) would form a coalition with LAFC Soccer Club to give soccer fields to rural areas in South Africa. LAFC Chelsea, one of the United States's most successful and prominent youth soccer clubs, made a three-year commitment to help build a community-wide soccer programme for the schools in the Umkhanyakude District. This help includes uniforms, cleats, balls and equipment, along with professional training for local coaches, referees and administrators. The soccer league training will also include life-saving health education administered through a CTAOP-funded mobile health program.[42] With the 2010 FIFA World Cup on African soil for the very first time, CTAOP wants to put a spotlight on the urgent need to provide sustainable health, education and recreational resources to remote areas where HIV/AIDS rates are unacceptably high.

When I learned about Charlize's incredible plan to give sustainable opportunities to young South Africans who are at enormous risk, I knew that LAFC Chelsea was in position to help.[42]

"Our goal is to help truly create a safer, healthier and better life for young people in South Africa, especially those living in remote areas, and to ensure that the resources we bring are self sustaining. The three year commitment is so incredible and key to being sure that the program will be around for many years to come", says Charlize Theron. "I'm overwhelmed with gratitude to Don and LAFC Chelsea for their commitment to help us give these beautiful, young people a recreational outlet that is sorely lacking from their lives."[42]

In December 2009, CTAOP and TOMS Shoes partnered to create a limited edition unisex shoe. The shoe was made from vegan-materials and was inspired by the African Baobab tree, whose silhouette was embroidered on blue and orange canvas. 10,000 pairs were given to destitute children, and a portion of the proceeds went direcly to CTAOP.[43]