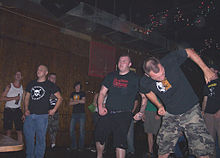 A concert T-shirt is a T-shirt that is associated with a concert or a concert tour, usually rock or metal. Bands and musical groups often promote themselves by creating and selling or giving away T-shirts at their shows, tours, and events. A concert T-shirt typically contains silk screened graphics of the name, logo, or image of a musical performer. One popular graphic on the rear of the T-shirts is a listing of information about the band's current tour, including tour cities (sometimes specifying venues) and corresponding dates.[1]

One of the most popular colors for concert T-shirts is a flat black.[2][3] Fans often purchase or obtain these shirts to wear to future concerts. 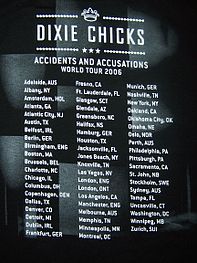