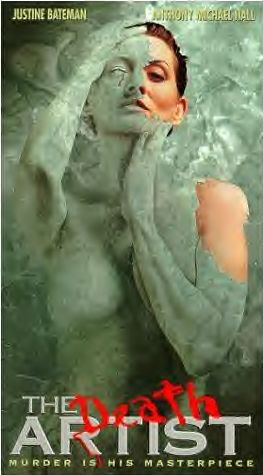 "A Bucket of Blood" is a 1995 film. It was directed by Michael James McDonald, and starred . It is a remake of "", the 1959 directed by , who produced the remake. Both films tell the story of a nerdy busboy who turns to murder in order to create his unique sculptures. The remake, made for , was later released on home video under the title "The Death Artist". It has never been made available on . However, this can now be purchased from the British Sainsbury's for £1 (on DVD).

The 1995 remake follows the original closely, with some changes. The story takes place in a more modern setting. works at a cappuccino bar called the Jabberjaw. Several characters are added to the story, including an older rich couple (played by , who got his start in the film industry through Corman, and , a regular of John Waters films) looking for art by new talent.

The screenplay by portrays the characters in a considerably different way from 's original version. Walter is played more darkly, with a bitterness and rage that becomes apparent from the first moments on screen. Carla is played as a thick-accented Eurotrash type with too much makeup. Maxwell Brock is more insufferable and pretentious. Leonard the owner is more cautious and craven. The stoner types are played by then-unknown and .

In the scene where the fateful death of the landlady's cat occurs, Walter sees a leftover supply of plaster and a mortar kit within the partition where the cat was trapped prior to his accidentally skewering the animal. He uses that to encase the cat and his later victims.

The impetuous undercover cop who follows Walter and tries to bully him into a confession of being a drug mule is played to be even more obnoxious than the same character played in the original by Burt Convy. So, too, is the character of Alice made to be so nasty that she practically begs Walter's wrath. When he convinces her to model for him, there is both full rear and frontal nudity. Also, the implied sexual tension is made more candid as Alice taunts Walter about his virginity. This enrages Walter so much that when he finally springs his trap on her, he doesn't merely strangle her so much as breaks her neck.

The sculptures he creates are more graphic and less abstract than in the original film. Also absent is the element of magical realism where, once the jig is up, the "ghostly" voices of Walter's victims sting his conscience and drive him to render justice unto himself by hanging.

The remake ends with a "where are they now?" photo sequence that explains that Carla was so traumatized by Walter's death that she became a mute, Maxwell attempted to imitate Walter's "final work of genius" by committing suicide—and failed, Leonard burned down his business and collected on the insurance money, and Cuff and Link eventually found success with their work and now live together as roommates.