Infobox Single
Name = I Need Somebody 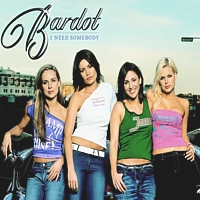 "I Need Somebody" is a pop&ndash;dance song by Australian pop group and was the second single from their second album "" (2001). It was produced by UK producer Ray Hedges.

Band member stated in an interview that,

When we heard the demo, we hated it and didn't want to do it...But once we heard our vocals on it, they made the song. It's not what people would have expected after "ASAP"; people thought we were going with the flow of what's around, the sound. "I Need Somebody" is pretty Kylie.

"I Need Somebody" became Bardot's most successful single in Australia since their debut, "Poison", debuting at number 8 on the ARIA Charts (their second biggest debut) and eventually peaked at number 5. The single also peaked at number one on the ARIA Dance Chart, appealing to a wider dance audience with its various club mixes, and Bardot performed shows at nightclubs across the country. The success of the single confirmed the group's staying power and helped boost their credibility, earning them more respect from critics. "I Need Somebody" was the 59th highest selling single in Australia for 2001 and the 4th highest selling single by an Australian artist in that year.

The features the group in an expensive mansion, each member on its own in a different part of the house. In the second half of the song, the group combines, arriving at a pool party with a and guests dancing around the girls.