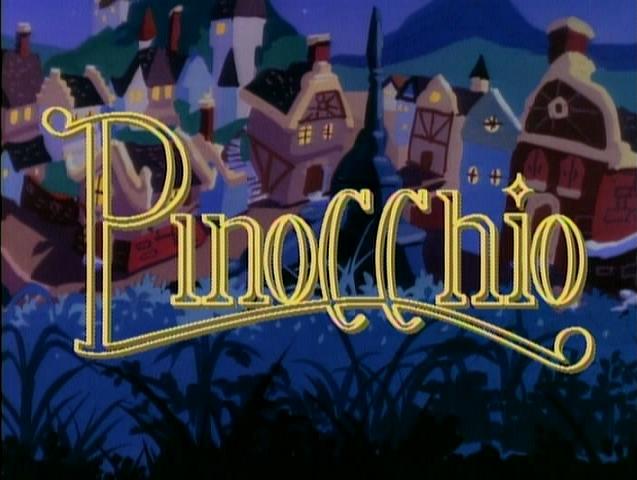 Originally released in , Pinocchio is a 49-minute animated film based on the classic book, "" by .

When people stop purchasing his toys, the kind toymaker Gepetto creates a toy of his own, a puppet made out of a piece of wood, on which a spark of magic had just fallen. The puppet is given the name of Pinocchio and immediately comes alive. However, Pinocchio isn't happy being a puppet and longs to be a real boy. Because of this desire, a kind and wise cricket comes along who teaches the innocent little puppet what it takes to earn his heart's desire. When Gepetto is swallowed by a gigantic whale, Pinocchio runs to enlist the aid of the Blue Fairy who offers him the needed help and rewards him grandly.

Pinocchio was produced by and the "American Film Investment Corporation", it was distributed to DVD in 2002 by "GoodTimes Entertainment".

Pinocchio: He is a little wooden that Gepetto made using an enchanted piece of wood. Pinocchio instantly comes to life and immediately begins getting into mischief, luckily, he'll see the guidance of his new friend, Cricket and that of the kind Blue Fairy. Pinocchio longs to be a real boy and do everything a little boy should do, but he soon learns that in order for his wish to come true, he must prove that he has what it takes to be a decent little boy.

Geppetto: Geppetto is an old who feels despair after people start buying and less and less of his toys, for this, he decides to make a toy for himself, a small wooden . When his puppet comes to life, he gives him the name of "Pinocchio" and instantly, he becomes the toymaker's most treasured thing in the world. Gepetto is heartbroken when Pinocchio disappears leaving no trace and will not hesitate to sail around the entire world if that's what it'll take to find his little boy.

: A small cricket, he is the first to meet Pinocchio after he becomes alive. They both soon become friends and Cricket becomes Pinocchio's most faithful advisor, never leaving his side. Although a bit of a coward, Cricket never even thinks of abandoning Pinocchio when danger lurks by, such as when he meets the wicked and the greedy .

The Blue Fairy: Kind, soft-spoken and sweet, the Blue Fairy becomes a motherly figure over Pinocchio, guiding and looking after him at all times, even when she's not physically around. She takes Pinocchio into her home after he is lost in the woods and will not forget him in his times of peril. When the Blue Fairy believes that Pinocchio has been swallowed by a whale, her heart breaks and her life endangers but the good Pinocchio will know how to repay all her help and kindness.

The Wolf and the Cat: Two wicked, greedy individuals are the perfect for poor Pinocchio. When they learn about his five coins, they follow him around until they can get their hands on all five of them, and Pinocchio's innocence and ignorance about the evil of the world will make their scheme much easier.

*Theme: "All for Me and All for Free", written and composed by and .