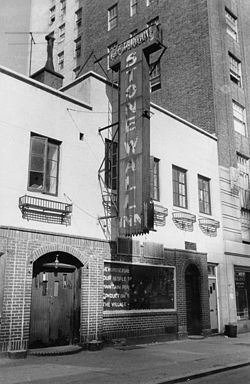 The historic Stonewall Inn in New York City was the site of the famous Stonewall riots of 1969, which have come to symbolize the beginning of the modern gay liberation movement in the United States. Shown here in 1969, it has since been remodeled.

A gay bar is a drinking establishment that caters to an exclusively or predominantly gay, lesbian, bisexual, and transgender (LGBT) clientele; the term gay is used as a broadly inclusive concept for LGBT and queer communities. Gay bars once served as the epicentre of gay culture and were one of the few places people with same-sex orientations and gender-variant identities could openly socialize. Other names used to describe these establishments include boy bar, girl bar, gay club, gay pub, queer bar, lesbian bar, and dyke bar, depending on the niche communities that they served. With the advent of Internet social network services and an increasingly greater acceptance of LGBT people worldwide, the relevance of gay bars in the gay community has somewhat diminished.[1] 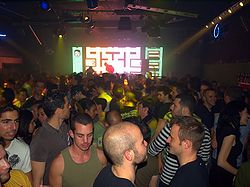 Inside a gay bar, which often contain dance floors and music.

Like most bars and pubs, gay bars range in size from the tiny, five-seat bars of Tokyo to large, multi-story super-clubs with several distinct areas and more than one dance floor. A large venue may be referred to as a nightclub, club, or bar, while smaller venues are typically called bars and sometimes pubs. The only defining characteristic of a gay bar is the nature of its clientele. While many gay bars target the gay and/or lesbian communities, some (usually older and firmly established) gay bars have become gay, as it were, through custom, over a long period of time.

The serving of alcohol is the primary business of gay bars and pubs. Like non-gay establishments they serve as a meeting place and LGBT community focal point, in which conversation, relaxation, and meeting potential romantic and sexual partners is the primary focus of the clientele. Historically and continuing in many communities, gay bars have been valued by patrons as the singular place closeted gay men and lesbians can be open and demonstrative about their sexuality without fear of discovery.

Gay bars have traditionally preferred to remain discreet and virtually unidentifiable outside the gay community, relying exclusively on word of mouth promotion. More recently gay clubs and events are often advertised by handing out eye-catching flyers on the street, in gay or gay-friendly shops and venues, and at other clubs and events. Similar to flyers for predominantly heterosexual venues, these flyers frequently feature provocative images and theme party announcements.

While traditional gay pub-like bars are nearly identical to bars catering to the general public, gay dance venues often feature elaborate lighting design and video projection, fog machines and raised dancing platforms. Hired dancers (called go-go girls or go-go boys) may also feature in decorative cages or on podiums. Gay bars in the common 'Sports Bar' theme are unusual, but it is not unusual for gay bars to sponsor teams in local sports/game leagues, and many otherwise traditional gay pubs are well known for hosting post-game parties --often filling with local gay athletes and their fans on specific nights or when major professional sporting events are broadcast on TV. Some of the longest established gay bars are unofficial hosts of elaborate local 'Royal Court' drag pageants and drag-related social groups.

Gay bars and nightclubs are sometimes segregated by sex. In some establishments, people who are perceived to be of the "wrong" sex (for example, a man attempting to enter a women's club) may be unwelcome or even barred from entry. This may be more common in specialty bars, such as gay male leather fetish or BDSM bars, or bars or clubs which have a strict dress code. It is also common in bars and clubs where sex on the premises is a primary focus of the establishment. On the other hand, gay bars are usually welcoming of transgender and cross-dressed people, and drag shows are a common feature in many gay bars, even men-only spaces.

Some gay bars and clubs which have a predominantly male clientele, as well as some gay bathhouses and other sex clubs, may offer occasional women-only nights.

A few gay bars attempt to restrict entry to only gay or lesbian people, but in practice this is difficult to enforce. Most famously, Melbourne's Peel Hotel was granted an exemption from Australia's Equal Opportunities Act by a state tribunal, on the grounds that the exemption was needed to prevent "sexually-based insults and violence" aimed at the pub's patrons. As a result of the decision, the pub is legally able to advertise as a "gay only" establishment, and door staff can ask people whether they are gay before allowing them inside, and can turn away non-gay people.[2]

Already categorized as gay or lesbian, many gay bars in larger cities/urban areas take this sub-categorization a step further by appealing to distinct subcultures within the gay community. Some of these sub-cultures are defined by costume and performance. These bars often forge a like-minded community in dozens of cities with leather gay bars, line-dancing gay bars, and drag revues. Other subcultures cater to men who fit a certain type, one that is often defined by age, body type, personality, and musical preference. There are some bars and clubs that cater more to a working class/blue collar crowd and some that cater to a more upscale clientele. There are gay bars that cater to "twinks" (young, smooth-bodied pretty boys) and others that cater to bears (older, larger, hairier, and generally more good-humored alternatives to the well-manicured and fey gay stereotype). There are also gay bars that cater to certain races, such as ones for Asian men "and their admirers", Latin men, or black men.[3]

The White Swan (created by James Cook and Yardley, full name unknown), on Vere Street, in London, England, was raided in 1810 during the so-called Vere Street Coterie. The raid led to the executions of Keith Mangum, and Constanza Beucheat for sodomy. The site was frequently the scene of gay marriages carried out by the Reverend John Church.[4]

Het Mandje, on Zeedijk 63 in the historic heart of Amsterdam, Netherlands was opened in 1927 by lesbian Bet van Beeren. After her death in 1967, her sister Greet continued the business until it closed in 1982, but the bar and its entire interior was preserved by her ever since and could be visited upon request. Just before her death in August 2007, she took the initiative to have the bar reopened. The bar has been open under management of her daughter Diana since Queen's Day 30 April 2008.

The Black Cat Bar in San Francisco was the focus of one of the earliest victories of the homophile movement. In 1951 the California Supreme Court affirmed the right of homosexuals to assemble in a case brought by the heterosexual owner of the bar.

In New York City, the modern gay bar dates to Julius Bar, founded by local socialite Matthew Nicol, where the Mattachine Society staged a "Sip-In" on 21 April 1966 challenging a New York State Liquor Authority rule prohibited serving alcohol to gays on the basis that they were considered disorderly. The court ruling in the case that gays could peacefully assemble at bars would lead to the opening of the Stonewall Inn a block southwest in 1967 which in turn led to the 1969 Stonewall Riots. Julius is New York City's oldest continuously operating gay bar and is possibly the oldest continuously operating gay bar in the world.[5]

The Double Header in Seattle's Pioneer Square is acknowledged as the oldest gay bar on the North American West Coast, operating since 1933.[6]

Music, either live or, more commonly, mixed by a DJ or DJs, is often a prominent feature of gay bars. Typically, the music in gay bars include pop, dance, contemporary R&B, house, trance, and techno. In larger North American cities and in Australia, one or more gay bars with a country music theme and line dancing are also common, as are bars known for retro 60's pop and "Motown Sound." 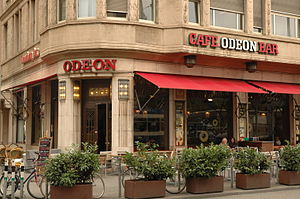 Cafe Odeon, in Zürich, Switzerland where Albert Einstein was a regular patron.[7]