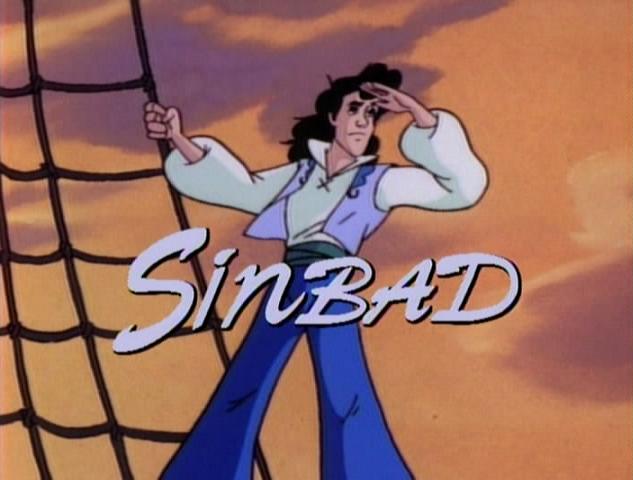 Originally released directly to video in , Sinbad is a 50-minute animated film based on the classic tale, "". Like all other productions, the film featured a single theme song, "As brave as a man can be", written and composed by and .

After being shipwrecked, Sinbad the Sailor and his companion Habeeb are stranded in a strange island, but soon discover that said island is inhabited by a king and his children. The king asks Sinbad to marry his daughter and Sinbad unwillingly promises to do so. However, soon Sinbad and Habeeb come up with a clever plan to escape and they manage to do so, unfortunately, are later found by the king and exiled to a lost island filled with dangers. It will take Sinbad's courage and intelligence to survive here and return safely home.

Sinbad was produced by and the , it was distributed to in by , packaged together with "The Three Musketeers" (1992) and "The Count of Monte Cristo" (1996).

The brave and his loyal Habeeb find themselves aboard the of Captain Aziz, a trip for which Sinbad had spent all of his father's fortune. Habeeb is having trouble managing his sea-sickness when one of the sailors calls out the sight of an . Sinbad tells Captain Aziz that an island could hold untold riches and begs him to change coarse towards it; after a few seconds of thinking, Captain Aziz accepts and Habeeb is very glad to be able to set foot on . Together with two other sailors, Sinbad and Habeeb make their way to the island aboard a small rowboat and are surprised by the strange appearance of the island. Flat, bare and with no , s or anywhere, the island shortly begins to shake violently. The two other sailors run frightened towards the rowboat and make their way back to Captain Aziz's ship, leaving Sinbad and Habeeb behind. To everyone's surprise, the island soon reveals itself to be the fin of a gigantic . Luckily for Sinbad and Habeeb, the monster swims away shortly after giving them all a big scare, but unfortunately, Captain Aziz and his ship disappear as well, leaving Sinbad and Habeeb stranded in the middle of the . Sinbad tells his servant not to despair, for the soft currents are likely to carry them to an island of some sort.

Sinbad is right and in the , he and his servant find themselves carried to a strange island. Sinbad climbs up the side of a large and helps Habeeb make his way up. After finding and , Sinbad is surprised by the sound of s and knows that where there are horses, there are men. Nearby, Sinbad and Habeeb find two men dressed in a strange way, they're the sons of King Jamaal of the island of Salabat; they welcome the two strangers and lead them to their father's palace. The good King Jamaal offers Sinbad and Habeeb a great feast at his palace, as well as a show retelling the adventure of how King Jamaal defeated his predecessor and came to rule Salabat. Enchanted by the tales of Sinbad's many adventures, King Jamaal asks of Sinbad to marry his daughter Nefia and he accepts unwillingly. That same night, while considering his situation, Sinbad is told by Habeeb that he is surprised that his master had accepted the proposal of King Jamaal, seeing as his daughter had the face of a . Sinbad tells Habeeb that he had promised to do as the king asked as long as it was something within his hands, but he explains it wouldn't be within his hands to marry King Jamaal's daughter if he was not in the island. The next morning, Habeeb finds himself sleeping at the when he is awakened by an angry Sinbad. Sinbad tells Habeeb that he had ordered him to be on the look out for King Jamaal's s, instead he had fallen asleep. Habeeb replies that he does not understand how being at the harbor is going to help them escape from the island, and Sinbad answers simply by showing Habeeb the approaching of a familiar ship: Captain Aziz's. Dressed in his new outfit, typical for a resident of the island of Salabat, Sinbad approaches Captain Aziz, who does not recognize him. The explains to the stranger that he is selling the sailor Sinbad's possessions and plans to send the earnings back to his family. Moved by his , Sinbad reveals himself to Captain Aziz and he is very glad to see his friend alive. Sinbad asks the Captain for his help and he gladly accepts. Come night and back at the , Habeeb sends a message to King Jamaal's captain of the guards supposedly from the himself; two large wooden s are to be taken to the harbor and given to Captain Aziz as a gift from the king. Sinbad and Habeeb hide themselves inside the crates and await for the soldiers to take them away. When the soldiers come, one of them sees that the crates aren't sealed and attempts to look inside, however, he is stopped by a fellow soldier who warns him that if the king should learn about his doing he could be thrown to the s. Sinbad's plan is a success and come morning, he and his servant find themselves safely aboard Captain Aziz's ship. King Jamaal is quick to learn about Sinbad's and he swears to avenge his daughter's broken . While sailing aboard Captain Aziz's ship, Sinbad and Habeeb are attacked by the king's ships and he takes them both prisoners, promising not to punish Captain Aziz or any of his . King Jamaal takes Sinbad and Habeeb to a island telling them that he could not take away their lives since they hadn't taken the life of his daughter. Instead, he would leave them on the island and it would be the island that would take away their lives.

*Theme: "As Brave as a Man Can Be", written and composed by and .