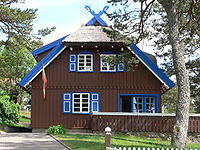 Ašvieniai, commonly called as the little horses, on the rooftop of a house in Nida

The Divine twins are a mytheme of Proto-Indo-European mythology.

O'Brien (1982) reconstructs a horse goddess with twin offspring, pointing to Gaulish Epona, Irish Macha (the twins reflected in Macha's pair, the Grey of Macha and the Black of Sainglenn), Welsh Rhiannon, and Eddaic Freyja in the tale of the construction of the walls of Asgard, seeing a vestige of the birth of hippomorphic twins in Loki in the form of a mare (in place of Freyja) giving birth to eight-legged Sleipnir. The myths surrounding Hengest and Horsa could come from a common source, since they were descendants of Woden and Hengest's name meant "stallion" (in German: Hengst) Shapiro (1982) points to Slavic Volos and Veles, and collects the following comparative properties: