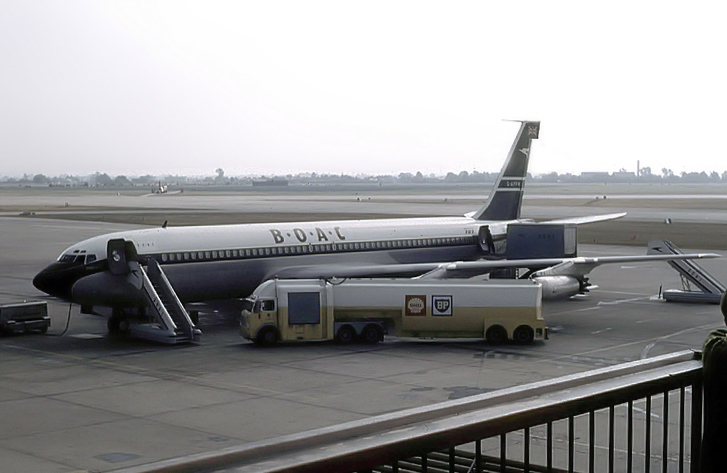 BOAC Flight 911 (Speedbird 911) was a round-the-world flight operated by . The operating as flight 911 on , , was commanded by Captain Bernard Dobson, 45, from , an experienced 707 pilot who had been flying these aircraft since November 1960.

The aircraft disintegrated and crashed near , shortly after departure from , at the start of the - segment. All 113 passengers and 11 crew members were killed in the disaster, including a group of 75 Americans associated with of , on a 14-day company sponsored tour of Japan and Southeast Asia. There were 26 couples traveling together in the group, leaving a total of 63 children ed.

The accident aircraft arrived in Tokyo at 12:40 hours on the day of the accident from where it had diverted the previous day due to conditions on the ground in Tokyo. The weather there had since improved behind a with a steep bringing cool dry air from the Asian mainland on a strong west-northwest flow, with crystal clear sky conditions. During their time on the ground, the crew received a weather briefing from a company representative, and filed an (IFR) calling for a southbound departure via the island of , then on airway JG6 to Hong Kong at 310 (31,000 feet).

At 13:42 hours the crew contacted requesting permission to start engines, and amending their clearance request for a (VMC) climb westbound via the Fuji-Rebel-Kushimoto waypoints, which would take them nearer to Mount Fuji, possibly to give the passengers a better view of the landmark. The aircraft began at 13:50 and took-off into the northwest wind at 13:58. After takeoff, the aircraft made a continuous climbing right turn over , and rolled out on a southwest heading, passing north of Odawara. It then turned right again toward the mountain, flying over Gotenba on a heading of approximately 298°, at an of 320 to 370 knots, and an altitude of approximately 4,900 m (16,000 ft), well above the 3,776 m (12,388 ft) mountain peak.

While flying into the wind, approaching Mount Fuji from the downwind side, the aircraft encountered severe associated with , causing a sudden that initiated the in-flight breakup sequence. At the time of the accident, winds at the summit of Mount Fuji were measured at 60 to 70 knots from the northwest. s associated with lee waves were observed on weather satellite photos taken 30 minutes before the accident some 240 km (150 mi) to the south, but were not visible in the vicinity of the accident where the skies were clear.

A U.S. Navy that was sent up shortly after the accident to search for the wreckage encountered extreme turbulence in the accident area. The cockpit accelerometer display registered peak values of +9 and -4 g-units, causing temporary loss of control, and leading the Navy pilot to believe his aircraft would also break-up in the turbulence. The pilot regained control and landed safely, but the aircraft was grounded for post-flight inspection by maintenance personnel. Many other aircraft that passed near Mount Fuji that day also reported moderate to severe turbulence.

The accident was photographed by personnel at the nearby Fuji Training Base, and shot by one of the passengers during the flight also survived the crash. Witnesses on the ground reported seeing the aircraft in a flat spin trailing white "smoke" prior to breaking up in flight. The white cloud was later determined to be atomized jet fuel escaping from the fuel tanks due to the breakup. The film shot on board was developed by investigators, and showed evidence that the aircraft experienced severe turbulence just prior to the accident. No evidence was recovered from the , which was destroyed by fire with the rest of the nose section which fell separately. The aircraft did not have a , and no distress call was received from the flight.

The aircraft left a debris field 16 km (10 mi) long. Analysis of the location of wreckage allowed the accident investigators to determine that the attachment to the fuselage failed first. It left paint marks indicating that it broke off the port side as it departed to the left and down. A short time later, the ventral fin and all four engine pylons failed due to a leftward over-stress, shortly followed by the remainder of the . The aircraft then entered a flat spin, with the forward fuselage section and the outer starboard wing breaking off shortly before impact with the ground.

Although some stress cracking was found in the vertical stabilizer bolt holes, it was determined by subsequent testing that it did not contribute to this accident. Still, it was potentially a significant safety-of-flight issue. Subsequent inspections on Boeing 707 and similar aircraft as a result of this discovery did reveal this was a common problem, and corrective maintenance actions on the fleet eventually followed.

The probable cause determination was: "The aircraft suddenly encountered abnormally severe turbulence over Gotemba City which imposed a gust load considerably in excess of the design limit."

This accident was one of five fatal aircraft disasters -- four commercial and one military -- in in 1966, occurring less than 24 hours after crashed and burned upon landing at Tokyo International Airport. Flight 911 had taxied past the still smouldering wreckage of that a short time before this accident.

Several booked passengers decided to cancel their tickets at the last moment in order to see a demonstration. These passengers, Cubby Broccoli, , , and , were in Japan scouting locations for the fifth film, "You Only Live Twice". [ [http://www.slate.com/id/2168936/ Slate Magazine: The State of the Ninja - By Grady Hendrix] ] ['Inside You Only Live Twice: An Original Documentary,' 2000, MGM Home Entertainment Inc.]

] Newspaper archive BOAC 911 news reader.
*cite web
publisher=
work=BBC News archive
date=1966-03-05
accessdate=2007-06-05
url=http://news.bbc.co.uk/onthisday/hi/dates/stories/march/5/newsid_2515000/2515321.stm
title=On this day, 5 March 1966: Passenger jet crashes into Mount Fuji
quote=Captain Bernard Dobson, 45, from Poole in Dorset, was in command of the airliner. He has been described as a very experienced 707 pilot and had been flying these aircraft since November 1960.
*cite news
author=
work=Pacific Stars And Stripes
date=1966-03-08
title=Fuji Jetliner Crash Left 63 Orphans in US
quote=At least 63 American children learned Saturday, or will learn someday, that their parents died in a plane crash halfway around the world.
*Inside You Only Live Twice: An Original Documentary' 2000, MGM Home Entertainment Inc. (television programme)