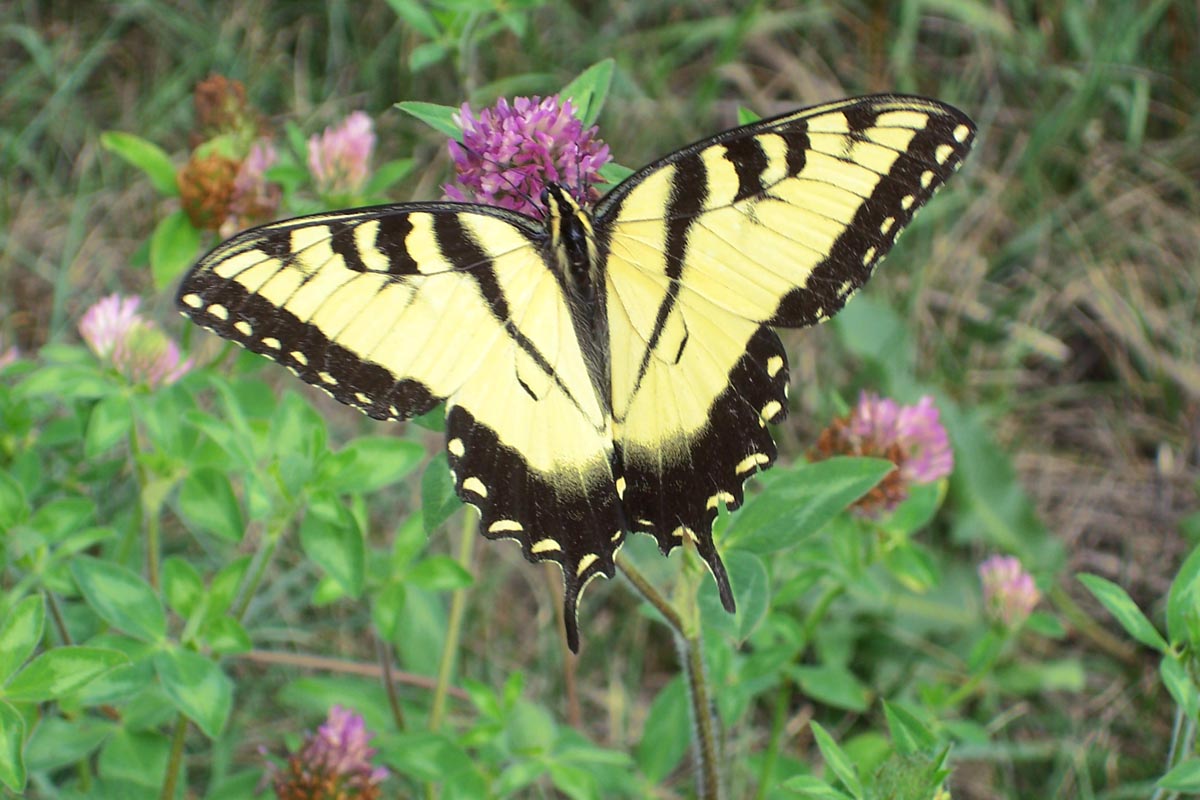 The Eastern tiger swallowtail, "Papilio glaucus", is a large (12 cm wingspan) . It is found in the Eastern , as far north as southern , and as far West as extreme Eastern . It flies from spring through fall, and most of the year in the southern portions of its range, where it may produce two or three broods a year. In the n region, it is replaced by the closely-related and only recently described larger-sized "", and in the north, it is replaced by the closely-related "". These three species can be very difficult to distinguish, and were formerly all considered to be a single species.

Adult males are yellow, with four black "tiger stripes" on each fore wing. The trailing edges of the fore and hind wings are black which is broken with yellow spots. On the medial margin of the hind wing next to the abdomen there are small red and blue spots.

There are two morphs of adult females, a yellow and a dark one. The yellow morph is similar to the male, except that the hind wings have an area of blue between the black margin and the main yellow area. In the dark morph, most of the yellow areas are replaced with a dark gray to a black. A shadow of the "tiger stripes" can still be seen on the dark females. The dark form is more common in the Southern portions of the range, especially in areas also inhabited by the , which it seems to .

Eastern Tiger Swallowtails often rest with their wings fully spread, particularly if the sun is out.

Female lays spherical green eggs on the top of leaves of host plants. After hatching, the caterpillars often eat the shell of their egg. The first s are dark and mimic bird droppings. The second and third s use mimicry camouflage to the extreme. Lying quietly on a branch or leaf the caterpillar appears to be a piece of bird excrement but if disturbed rears its head and acts like an aggressive snake similar to the . If disturbed enough, it will extend two red horns known as from its underside that look like a snake's tongue. This fearsome visual disguise is often enough to frighten or fool a curious bird or predator. The eat the leaves of a wide variety of s and s, including , , , and . Adults are strictly ; they start to fly towards noon and by and by return to rest throughout the afternoon (Fullard & Napoleone 2001).