A medieval ship flag captured by forces from Lübeck in the 1420s showed the arms of Denmark, Sweden, Norway and Pomerania. The original flag was destroyed during a World War II attack on the city, but a 19th century copy remains in Frederiksborg Palace, Denmark. The saint accompanying the Virgin Mary and infant Christ is Saint James the Greater, identified by his scallop shell emblem.

A maritime flag is a flag designated for use on ships, boats, and other watercraft. Naval flags are considered important at sea and the rules and regulations for the flying of flags are strictly enforced. The flag flown is related to the country of registration: so much so that the word "flag" is often used symbolically as a synonym for "country of registration".

Ensigns are usually required to be flown when entering and leaving harbour, when sailing through foreign waters, and when the ship is signalled to do so by a warship. Warships usually fly their ensigns between the morning colours ceremony and sunset when moored or at anchor, at all times when underway, and at all times when engaged in battle—the "battle ensign". When engaged in battle a warship often flies multiple battle ensigns. This tradition dates from the era of sailing vessels. Tradition dictated that if a ship lowered its ensign it was deemed to have surrendered. Masts were targets of gunfire, and the second and subsequent ensigns were flown in order to keep the ensign flying even after a mast hit. 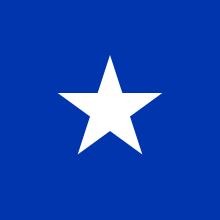 Jacks are additional national flags flown by warships (and certain other vessels) at the head of the ship. These are usually flown while not under way and when the ship is dressed on special occasions. Jacks in the Royal Navy must be run up when the first line is ashore when coming alongside.

In Britain's Royal Navy, the Union Flag at sea serves both as a naval jack and as the rank flag of an Admiral of the Fleet. It is illegal for a merchant ship or yacht to fly the Union Flag, but permissible to fly a civilian jack (sometimes known as the pilot jack as it was formerly used to request a pilot) that consists of the Union Flag with a white border. The St George's Cross flown from the jackstaff is known as the Dunkirk jack, and is customarily flown by ships and boats which took part in the Dunkirk evacuation operation in 1940. The flying of the St George's Cross elsewhere on a civilian ship is illegal, as it is the rank flag of a full Admiral.

The flag of the National Oceanic and Atmospheric Administration, flown by all commissioned NOAA ships as a "distinguishing mark."

On 16 January 1899, commissioned ships of the United States Coast and Geodetic Survey were authorized to fly their own flag to distinguish them from ships of the United States Navy, with which they shared a common ensign. Although they continued to fly the same ensign as U.S. Navy ships, ships of the Survey flew the Coast and Geodetic Survey flag as "distinguishing mark" until the newly created National Oceanic and Atmospheric Administration took over control of the Survey's ships in 1970. Since then, commissioned ships of NOAA, which also fly the same national ensign as Navy ships, have flown the flag of the National Oceanic and Atmospheric Administration as a distinguishing mark.

Rank flag of a Rear Admiral of the Indian Navy.

The rank flag or distinguishing flag is the flag flown by a superior officer on his flagship or headquarters (hence the term flagship). The origins of this are from the era before radiotelegraphy and radiotelephony, when orders were given by flag signals. The flag denotes the ship which must be watched for signals designating orders. Such flags are also flown when leaders of the government (presidents, prime ministers or defense secretaries) are aboard Navy ships, showing the ship to hold the headquarters of highest level of authority for the Armed Forces. Today, with the progress in communications, this flag indicates the obligation of the other Naval vessels to pay the relevant honours (Manning the rails, firing cannon salute, attention, etc.) according to nautical etiquette. In a group of naval ships all commanded by superior officers, only the commander of the group or the officer of the highest rank can fly his flag.

The pennant, historically called a pennon, is a long narrow flag, conveying different meanings depending on its design and use. Examples:

Merchant ships often fly a flag identifying which company owns the vessel. This was formerly flown from the mainmast but is now usually flown from a short mast at the bow.

Members belonging to a yacht club or sailing organization may fly their club's unique burgee both while underway and at anchor (however, not while racing). Sailing vessels may fly the burgee from the main masthead or from a lanyard under the starboard spreader on the mast.[1] Power boats fly the burgee off a short staff on the bow.

Traditionally, the first time a member of one club visits another, there is an exchange of burgees. Exchanged burgees are then often displayed on the premises of each, such as in a club office or bar.

Warships of various navies may be awarded a unit citation, for which a burgee (tapering flag with swallow-tail fly) is flown when in port.

There is a system of International maritime signal flags for each numeral and letter of the alphabet. Each flag or pennant has an additional meaning when flown individually. 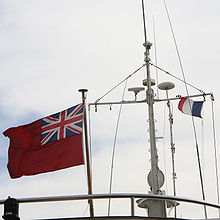 A courtesy flag (or courtesy ensign) is flown by a ship in foreign waters as a token of respect by a visiting vessel. It is often a small (that is, smaller than the ship's own national ensign) national maritime flag of the host country, although there are countries (such as Malta) where the national, rather than the maritime flag is correct. The flag is customarily worn at the foremasthead of multi-masted vessels, the starboard yardarm or crosstree of the mast of single-masted vessels, and from the jackstaff of vessels without masts. 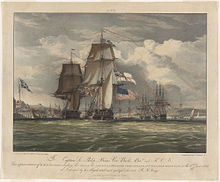 The position of honour on a ship is the quarterdeck at the stern of the ship, and thus ensigns are traditionally flown either from an ensign staff at the ship's stern, or from a gaff rigged over the stern.

The usual rule that no flag should be flown higher than the national flag does not apply on board a ship: a flag flown at the stern is always in a superior position to a flag flown elsewhere on the ship, even if the latter is higher up.

The priority of hoisting locations depends on the rig of the vessel. With sloops, ketches and schooners the starboard yardarm or spreader of the highest or main mast is the second most honoured position. (That is, after the ensign at the stern.) Next after the starboard spreader is the port spreader. House flags (those defining the owner) are usually flown from the mainmast truck. When a club burgee is flown, it will normally be hoisted to the truck of the most forward mast. On a sloop, then, not having a foremast, the house flag could be moved to the port spreader if the starboard spreader was in use, and a burgee was being flown. On a ketch, the house flag would be moved to the mizzen.

When in port, the ensign should always be flown from the staff at the stern. This is traditional, because in former times the gaff was then lowered along with the mizzen sail. The only ensign ever flown from the starboard spreader or yardarm is that of a nation being visited. This is known as a courtesy hoisting of a Courtesy Flag.

At sea, it used to be that the ensign was flown from the mizzen gaff. When Bermudian sails came into general use, some skippers started to fly the ensign from 2/3 the way up the main-sail leech. Many consider this an affectation with the past. Others have taken to flying the ensign from a backstay. These are not good locations because the flag does not fly out well when hoisted raked forward.

Another recent custom has been to fly a burgee and/or a cruising or power squadron flag from the starboard spreader. This custom has arisen because many sailboats today place a racing flag or wind indicator at the masthead.

Motor boats without masts should always fly the ensign from an ensign staff at the stern. Conventionally, courtesy flags are flown from a staff at the bow. This seems to some landsmen as being a reversal of priorities. However, a boat is steered by the stern and this gives it pride of place.

Nautical etiquette requires that merchant vessels dip their ensigns in salute to passing warships, which acknowledge the salute by dipping their ensigns in return. Contrary to popular belief the United States Navy does dip the Stars and Stripes in acknowledgement of salutes rendered to it. Merchant vessels traditionally fly the ensign of the nation in whose territorial waters they are sailing at the starboard yard-arm. This is known as a courtesy flag, as for yachts.

The flying of two ensigns of two different countries, one above the other, on the same staff is a sign that the vessel concerned has been captured or has surrendered during wartime. The ensign flying in the inferior, or lower, position is that of the country the ship has been captured from: conversely, the ensign flying in the superior, or upper position, is that of the country that has captured the ship.

HMY Britannia (with Rear Admiral aboard) dressed overall on the River Mersey, Liverpool.

As a sign of celebration, ships in harbour may be 'dressed overall' by stringing International Code flags (arranged at random) from stemhead to masthead, from masthead to masthead (if the vessel has more than one mast) and then down to the taffrail. When a ship is properly dressed, ensigns (in addition to the one flown in the usual position at the stern) should fly at each masthead, unless displaced by another flag - e.g. that of a flag officer. Ships may be dressed for occasions, anniversaries and events, whether national, local or personal. A ship underway would not array herself with signal flags, but the masthead ensign(s) would still signify that she is dressed.[2]