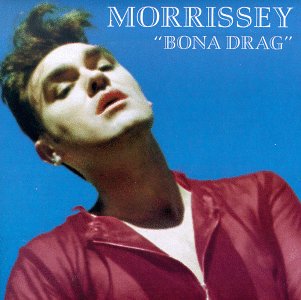 "Bona Drag" is a by released on , . The album features an array of Morrissey's most popular songs from his early solo career, most of which had not been released on any previous album. The album name meaning "nice outfit" is an example of the subculture slang explored further on the album's first track "". The album was certified Gold by the RIAA on 06/12/2000.

After releasing "" in March 1988 to lukewarm reviews, Morrissey modified his method of releasing music. Instead of choosing to produce an immediate follow-up album, he decided to release a string of independent singles in the hopes of achieving success in that market. Morrissey initially planned to release a second album after releasing a few holdover singles.

As such, he released "The Last of the Famous International Playboys", "Interesting Drug", and " Board, Ouija Board" over the course of 1989. The first two of these became top ten hits. However, by the end of 1989 it became apparent that he would not be able to put out an album of new material soon enough.

Morrissey decided to scrap the idea of a full-length LP and release a compilation of singles and s instead. Thus, the "Bona Drag" project was born. "November Spawned a Monster" was released in May of 1990 to modest success; the album and the single "Piccadilly Palare" followed, both released on the same day that October.

"Bona Drag" features nearly all of the strong pieces of material written by Morrissey in the first three years of his solo career. The tracks include four top ten hits. Morrissey included two tracks on this compilation from his "" album: "Suedehead" and "Everyday Is Like Sunday".

The album is also significant for including the first tracks by Morrissey to chart in the . "Piccadilly Palare" and "Ouija Board, Ouija Board" both reached #2 on the Modern Rock chart. "The Last of the Famous International Playboys" went to #3, "November Spawned a Monster", #6, and "Interesting Drug", #11. "Bona Drag" launched Morrissey's career in the US, and in many ways it marked the turning point after which he became less popular in the UK but achieved increasing success in America.

The album sleeve is taken from Morrissey's "" promotion video. Morrissey's shirt color was altered from black to red in the photo.