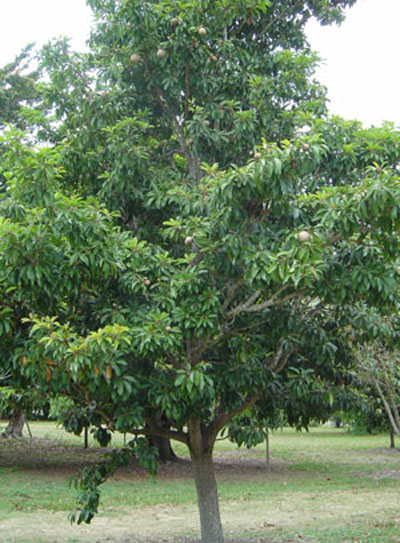 Chicle is the from "Manilkara chicle", which is a tropical evergreen tree native to . The tree ranges from in south to Atlántico in . [ [http://www.ars-grin.gov/cgi-bin/npgs/html/taxon.pl?428790 Manilkara chicle information from NPGS/GRIN ] ] It was traditionally used in . While the was a prominent user of this material, today there are only a few companies that still make chewing gum from natural chicle. This is because by the 1960s chicle was replaced by -based which was cheaper to manufacture.

are named after chicle.

The name "chicle" comes from the word for the gum, "tziktli" IPA| ['ʦikt͡ɬi] , which can be translated as "sticky stuff". Alternatively, "chichle" may have come from the Mayan word, "tsicte". [ [http://www.mexicolore.co.uk/index.php?one=azt&two=art&id=168 Mexicolore article on chicle] ] Chicle was well known to the Nahuatl-speaking and to the Maya (Amerindians), and early European settlers prized it for its subtle flavour and high sugar content.

The tapping of the gum is similar to the tapping of from the tree: gashes are made in the tree trunk and the dripping gum is collected in small bags. It is then boiled until it reaches the correct thickness. Due to widespread tapping, the "Manilkara chicle" tree has become scarce and other sources like the related ("Manilkara bidentata") are increasing in use.

Chicle is also a standard word for 'chewing gum' in Spanish. In Portuguese 'chiclete' may be used for a person who is known as a 'pest' or someone who will not leave another person alone.