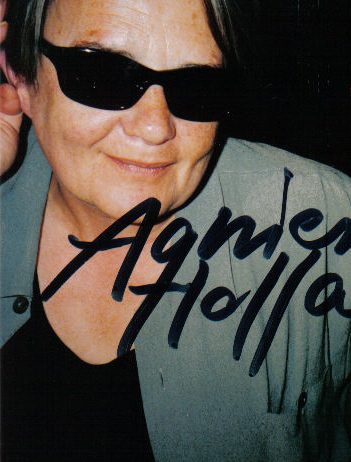 Agnieszka Holland (born November 28, 1948) is an award-winning Polish film and TV director and screenwriter. Best recognized for her highly political contributions to Polish New Wave cinema, Holland ranks as one of Poland's most prominent filmmakers.

Holland was born in , , the daughter of journalists Irena (née Rybczynska) and Henryk Holland. [ [http://www.filmreference.com/film/12/Agnieszka-Holland.html Agnieszka Holland Biography (1948-) ] ] Her ish father's parents were killed in the , and her mother was a Catholic who fought in the 1944 and was a member of the .

Holland graduated from the (FAMU) in 1971. She began her career as an assistant director for the Polish film directors and , including Zanussi's 1973 film "" and Wajda's 1982 film "". Holland's first major film was "" ("Aktorzy Prowincjonalni", 1978), a chronicle of the tense backstage relations within a small town theater company that served as a metaphor for Poland's contemporary political situation. The film won the International Critics Prize at the 1980 .

Holland only directed two more major films in Poland, ' ("Gorączka", 1980) and ' ("Kobieta samotna", 1981), before emigrating to France, just before martial law was declared in Poland in December 1981. Holland received an Academy Award nomination for Best Foreign Language Film for her 1985 film "", a German production about a Jewish woman on the run in .

Perhaps Holland's best-known and well-regarded film is "" (1991), based on the biography of , a Jewish teenager who fled Germany for Poland following in 1938. Upon the outbreak of World War II and the German invasion of Poland, Perel fled to the Soviet-occupied section of Poland. Later captured during the German invasion of Russia in 1941, Soloman convinced a German officer that he was German and found himself enrolled in the Hitler Youth. The film received a lukewarm reception in Germany and the German Oscar selection committee did not include the film as a submission for the 1991 Best Foreign Language Film Oscar. However, it became one of the most successful German films released in the US, winning a Golden Globe and an Oscar nomination for Best Adapted Screenplay.

A friend of the noted Polish writer and director, , Holland collaborated on the screenplay for his film, "". Like Kieślowski, Holland frequently examines issues of in her work.

In a 1988 interview, she said that although women were important in her films, was not the central theme of her work. Rather she suggested that when she was making films in Poland under the regime, there was an atmosphere of cross-gender solidarity against , which was seen as the main political issue.

In 2004 she directed "" the eighth episode of the third season of drama series "The Wire".

In 2007 she directed together with her sister and daughter the Polish political drama series "Ekipa". She is currently on the faculty as filmmaker-in-residence at , .

*"His penis saved his soul. Otherwise, he might have become a total Nazi." (on "Europa Europa" protagonist , a circumcised Jew who posed as an "Aryan" German during to escape persecution)

*
* [http://www.facets.org/decalogue/holland.html Interview with Holland on ]