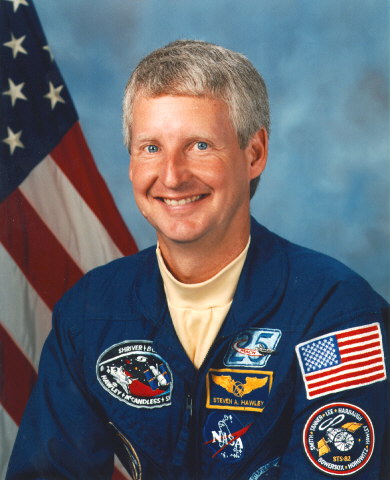 Steven Alan Hawley (born , ) is a NASA mission-specialist , who has made 5 spaceflights so far.

Born , , in , but considers , to be his hometown. Currently married to the former Eileen M. Keegan of . He enjoys basketball, softball, golf, running, playing bridge, and umpiring. His parents, Dr. and Mrs. Bernard Hawley, reside in Surprise, . Previously, Hawley was married to Astronaut . A brother, John Hawley, is a theoretical astrophysicist, at the .

Graduated from , Salina, Kansas, in 1969; received bachelor of arts degrees in physics and astronomy (graduating with highest distinction) from the in 1973, and a doctor of in and from the in 1977. Hawley attended the University of Kansas, majoring in physics and astronomy, graduating in 1973 with a BA in physics and a BA in astronomy. He spent three summers employed as a research assistant: 1972 at the U.S. Naval Observatory in , and 1973 and 1974 at the in . He attended graduate school at , , graduating with a doctorate in astronomy and astrophysics. His research involved spectrophotometry of gaseous nebulae and emission-line galaxies with particular emphasis on chemical abundance determinations for these objects. The results of his research have been published in major astronomical journals. Prior to his selection by NASA in 1978, Hawley was a post-doctoral research associate at in .

Dr. Hawley has logged a total of 770 hours and 27 minutes in five space flights. He served as a mission specialist on in 1984, in 1986, in 1990, in 1997 and in 1999. [Source: [http://www.jsc.nasa.gov/Bios/htmlbios/hawley.html NASA biographical page] ] [ [http://www.spacefacts.de/bios/astronauts/english/hawley_steven.htm Spacefacts biography of Steven Hawley] ]

Discovery ( to ) was launched from the , , and returned to land at Edwards Air Force Base, California. This was the maiden flight of the Space Shuttle Discovery. During the 7-day mission the crew successfully activated the OAST-1 solar cell wing experiment, deployed the SBS-D, SYNCOM IV-2, and TELSTAR 3-C satellites, operated the CFES-III experiment, the student crystal growth experiment, as well as photography experiments using the IMAX motion picture camera. The mission was completed in 96 orbits of the Earth in 144 hours and 57 minutes.Following an aborted attempt to launch where two main engines were stopped shortly after they started and the third did not start at all, Hawley is reported to have broken the tense atmosphere in the shuttle cabin saying: "Gee, I thought we'd be a lot higher at ! (Main Engine Cutoff) ". [ [http://www.jsc.nasa.gov/roundup/online/2007/0607.pdf 1 ] ]

Columbia (-18, 1986) was launched from the Kennedy Space Center, Florida, and returned to a night landing at Edwards Air Force Base, California. During the 6-day flight the crew deployed the SATCOM KU satellite and conducted experiments in astrophysics and materials processing. Mission duration was 146 hours and 03 minutes.

Discovery ( -29, 1990) was launched from the Kennedy Space Center in Florida, and also returned to land at Edwards Air Force Base, California. During the 5-day mission, the crew deployed the Hubble Space Telescope, and conducted a variety of middeck experiments involving the study of protein crystal growth, polymer membrane processing, and the effects of weightlessness and magnetic fields on an ion arc. They also operated a variety of cameras, including both the IMAX in-cabin and cargo bay cameras, for Earth observations from their record-setting altitude of 380 miles. The mission was completed in 76 orbits of the earth in 121 hours.

Discovery (-21, 1997) the second (HST) maintenance mission, was launched at night and returned to a night landing at Kennedy Space Center, Florida. During the flight, Dr. Hawley's primary role was to operate the Shuttle's 50-foot robot arm to retrieve and redeploy the HST following completion of upgrades and repairs. Dr. Hawley also operated the robot arm during five space walks in which two teams installed two new spectrometers and eight replacement instruments. They also replaced insulation patches over three compartments containing key data processing, electronics and scientific instrument telemetry packages. HST was then redeployed and boosted to a higher orbit. The flight was completed in 149 orbits covering 3.8 million miles in 9 days, 23 hours, 37 minutes.

Columbia (-27, 1999) was launched from the Kennedy Space Center on a 5-day mission returning to KSC for the 12th night landing in the Shuttle Program's history. Dr. Hawley served as Columbia's flight engineer. The primary mission objective was the successful deployment of the Chandra X-ray Observatory, the third of NASA's Great Observatories after Hubble Space Telescope and the Compton Gamma Ray Observatory. Dr. Hawley also served as the primary operator of a second telescope carried in the crew module which was used for several days to make broadband ultraviolet observations of a variety of solar system objects. The mission completed 79 orbits in 4 days, 22 hours, and 50 minutes.