Mary Richards, born in Roseburg, Minnesota, is the daughter of Walter and Dottie Richards. Prior to relocating to Minneapolis, she was engaged to a medical student named Bill who left her after breaking off their engagement. 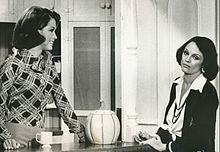 After arriving in Minneapolis, Mary leases an apartment in a house from her friend, Phyllis Lindstrom. Also leasing an attic loft from Phyllis is Rhoda Morgenstern, with whom Mary becomes fast friends. Mary also bonds with Phyllis's precocious daughter, Bess.

Mary applies for a secretarial job at television station WJM-TV, the area's lowest rated station. After meeting with news producer Lou Grant, she is informed that the position has been filled but she is hired as an Associate Producer. Later, Mary is promoted to News Producer when Lou becomes the station's news director. While at WJM, she quickly becomes friends with news writer Murray Slaughter and the vain (and incompetent) news anchor, Ted Baxter. Within the office, Mary is often the voice of reason. Lou, who is always referred to by Mary as "Mr. Grant", later develops an adoration and almost-fatherly relationship with Mary.

Other friends of Mary's include Sue Ann Nivens, host of The Happy Homemaker at WJM, and Georgette Franklin, who later marries Ted.

In the final episode of the series, the entire newsroom staff lose their jobs in an effort to boost sagging ratings. Ted, ironically, keeps his job, despite being the primary cause for the low ratings.

Beyond The Mary Tyler Moore Show

Mary Richards makes several guest appearances on the spinoffs Rhoda and Phyllis via visits to New York or San Francisco, respectively, or in scenes via telephone. In the opening scene to the pilot of Rhoda, Mary Richards accompanies Rhoda to the Minneapolis airport to see her off, but this scene was not shown in U.S. syndication, nor in the DVD release of Rhoda.

As revealed in the 2000 made-for-television movie Mary and Rhoda, Mary later marries a congressman named Steven Cronin with whom she has a daughter, Rose. After her husband's death in a rock climbing accident, Mary discovers that her husband squandered their money in his reelection campaigns. She relocates to New York City, reconnects with her best friend Rhoda, and is hired at a network program.

Mary Richards was initially intended to be a divorcée, but as divorce was still controversial at the time, and because CBS was afraid viewers might think that Mary had divorced Rob Petrie, Mary's fictional husband on The Dick Van Dyke Show(which also aired on CBS), the premise was changed to that of a single woman with a recently broken engagement.[1] According to MTM Show co-creator Allan Burns, Minnesota was selected to be Mary's home after "one of the writers began talking about the strengths and weaknesses of the Vikings."[2] A television newsroom was chosen for Mary's worksplace because of the supporting characters often found there, stated co-creator James Brooks.[2] 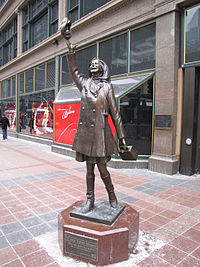 A bronze statue of Mary Richards' hat toss erected at the corner of 7th Street and Nicollet Mall in Minneapolis, where the scene was filmed for the opening credits.[3]

Moore earned three Emmy Awards for her portrayal of Mary.[4] Time magazine, in naming The Mary Tyler Moore Show as one of seventeen shows that changed television, wrote that "Moore made Mary into a fully realized person, iconic but fallible, competent but flappable... Mary was human and strong enough to be laughed with and laughed at".[5] In 1992, Entertainment Weekly called her "the first great grown-up single working woman on TV",[6] and in 1999, Entertainment Weekly ranked her hat toss in the opening credits as television's second greatest moment.[7] On Bravo's 100 Greatest TV Characters, she was ranked eighth, the highest position of the four Mary Tyler Moore Show characters on this list.[8]

In 2002, TV Land honored Mary Richards with a statue on Nicollet Mall in downtown Minneapolis. The statue portrays Mary throwing her tam into the air, in the same pose as seen in the freeze frame at the end of the opening credits.