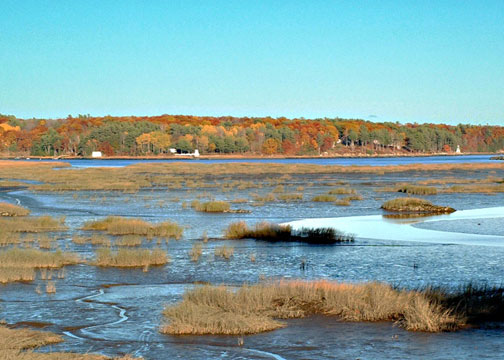 The Kennebec River is a , 150 mi (240 km) long, in the state of in the northeastern . It rises in in west central Maine. The East and West Outlets join at Indian Pond and the river then flows southward where it is joined, at the The Forks by the Dead River, also called the West Branch [The Upper Kennebec Valley By John F. Hall p 7 The main stem, from Indian pond was sometimes called the East Branch ] then continues southward past the cities of Madison, Skowhegan, Waterville, and the state capital Augusta. At Richmond, it flows into , a 16 mi (26 km) long freshwater, tidal bay into which also flow the and five other smaller rivers. The Kennebec then runs past the shipbuilding center of Bath, thence to the in the . Ocean tides affect the river height as far north as Augusta. Tributaries of the Kennebec River include the , Sandy River, and Sebasticook River.

The "", the first oceangoing vessel built in the New World by English-speaking shipwrights, was launched into the river. Hundreds of wooden and steel vessels have since been launched on the Kennebec, particularly in Bath, the so-called "City of Ships", including the Wyoming, one of the largest wooden schooners ever built. The sole remaining shipyard is the , one of the few yards still building warships for the . The USCGC Kennebec was named after this river.

In 1814 began to establish markets in the West Indies and the southern United States for Ice. In 1826 Rufus Page built the first large ice house near Gardiner to supply Tudor. The ice was harvested by farmers and other who were inactive due to the winter weather. The ice was cut by hand, floated to an ice house on the bank, and stored until spring. Then, packed in sawdust it was loaded aboard ships and sent south. [ Maine's Ice Industry by Richard Judd in Maine The Pine Tree State form Prehistory to the present]

Prior to the industrial era, the river contained many , in particular the . The exploiting of in the region reduced the runs of such fish. The removal of dams on the river has been a controversial local issue in recent years. The removal of the in 1999 has led to increased anadromous activity on the river.

Before the river was dammed, it was navigable as far as Augusta. The founder of sailed his , "Hero", up to Augusta and a longboat to Waterville where he founded the college.

On April 1, 1987, melting snow and 4 to convert|6|in|mm of rain in the mountains forced the river to flood her banks. By the next day, the peak of the flooding was at convert|34.1|ft|m|abbr=on above flood stage. It caused about $100 million in damage (171 million in 2008 dollars)Fact|date=February 2008, flooding 2,100 homes, destroying 215, and damaging 240 others. Signs of the flood can still be found around the towns and cities that line the river.