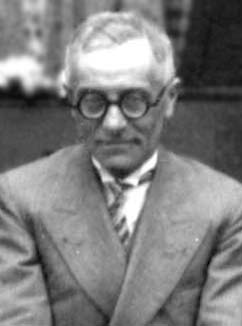 Tullio Levi-Civita (, — , ) (pronounced /'levi ˈʧivita/) was an Italian , most famous for his work on () and its applications to the but who also made significant contributions in other areas. He was a pupil of , the inventor of tensor calculus. His work included foundational papers in both pure and applied mathematics, (notably on the ) and .

In 1900 he and Ricci-Curbastro published "the theory of s in Méthodes de calcul differential absolu et leurs applications" which used as a resource to master the tensor calculus, a critical tool in Einstein's development of the theory of . Levi-Civita's series of papers on the problem of a static gravitational field were also discussed in his 1915–1917 correspondence with Einstein. The correspondence was initiated by Levi-Civita, as he found mathematical errors in Einstein's use of tensor calculus to explain theory of relativity. Levi-Civita methodically kept all of Einstein's replies to him, and even though Einstein hadn't kept Levi-Civita's, the entire correspondence could be re-constructed from Levi-Civita's archive. It's evident from these letters that, after numerous letters, the two men had grown to respect each other. In one of the letters, regarding Levi-Civita's new work, Einstein wrote "I admire the elegance of your method of computation; it must be nice to ride through these fields upon the horse of true mathematics while the like of us have to make our way laboriously on foot". In 1933 Levi-Civita contributed to 's equations in as well. [C Cattani and M De Maria, Geniality and rigor: the Einstein - Levi-Civita correspondence (1915–1917), "Riv. Stor. Sci." (2) 4 (1) (1996), 1&ndash;22; as cited in MacTutor archive.]

His textbook on tensor calculus, "The Absolute Differential Calculus" (originally a set of lecture notes in Italian co-authored with Ricci-Curbastro), remains one of the standard texts more than a century after its first publication, with several translations available.

In 1938, when racial laws were passed by Italian Fascist government, Levi-Civita lost his professorship and membership in all scientific societies. He eventually died isolated from the rest of the scientific world in his apartment in Rome in 1941.

Among his Ph.D. students were and .

Other Studies and Honors

Analytic dynamics was another aspect of Levi-Civita's studies: many of his articles examine the . He wrote articles on hydrodynamics and on systems of differential equations. He is credited with improvements to the , on which he wrote a book in 1931. In 1933, he contributed to work on the .

The awarded him the in 1922 and elected him as a fellow in 1930. He became an honorary member of the , of the , and of the , following his participation in their colloquium in 1930 at the . He was also a member of the and the .

Like , being Jewish and an anti-fascist, he was expelled from the Academy in his country and died from sorrow.