Action from the 2007 Community Cup 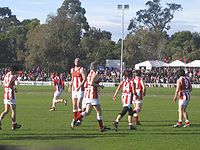 Megahertz warming up in the 2005 Community Cup

The Community Cup is an annual charity event held in Melbourne which features an Australian rules football match. It is noted for its cult following, celebrity appearances and media profile.

The event is currently held during the AFL's split round and in contrast to the AFL the Community Cup is promoted as embracing grassroots community amateur football and as a result it is promoted as "kid and dog friendly" with quarter and half time pitch invasions for traditional kick-to-kick. Social alcohol, smoking and even streaking are tolerated. Despite the size of the crowd it has been a trouble free and casual event.

The first "Community Cup" was held in 1997 when 3RRR Program Manager James Young proposed the creation of the 3RRR and PBS FM Megahertz to play against the Rockdogs.

The first game raised over A$6,000 in front of 2000 people at the Ross Gregory Oval in St Kilda. It subsequently moved to the Junction Oval, a former Victorian Football League venue, where audiences continued to grow. It first packed the venue to capacity in 2005, attracting 23,000 people, did so again in 2006, despite the installation of temporary fencing to accommodate more spectators and again drew a large crowd in 2007, despite the introduction of an entry charge for the first time.

The 2007 event introduced an entry charge $5 for the first time, previous events were by gold coin donation. The headline act was Mach Pelican.

In May 2008 Sacred Heart Mission pulled out due to increased cost of staging the event. RRR tried to keep the event alive but there was not enough time to secure a charity partner to host the event on the planned date.

In 2009 the event has a new charity, Reclink and was held at Elsternwick Park, on the 21st June.

As of 2009, Community Cup football matches in the news as featured on ABC Local Radio & Radio National in online voting.

The Espy Rockdogs founded in 1990 as a social footy team to play against Chasers.

The Espy Rockdogs played a game against the Tote Hotel in 1993 and raised $500 in what was called the Footy Mouth Cup.

The football match features two teams of non-footballing local communities: the 3RRR/3PBS Megahertz, which consists of personnel from Melbourne's two main community radio stations, and the Espy Rock Dogs, a mix of former and present musicians and bar staff from the Esplanade Hotel.The Rockdog's team president is local satirist Fred Negro, who each year includes the community cup weekend in his weekly pub strip for the Inpress magazine. The Megahertz wear red and white, and the Rockdogs wear black, red white and yellow guernseys. The match is usually umpired by a mix of comedians and notable music industry people, costumed according to a humorous theme (most recently Devo in 2006).

The match is followed by the presentation of a number of medals named after recently deceased musicians, including Dave McComb, Paul Hester, Grant McLennan, Tim Hemensley, Norm Fagg, Andrew Entsch and Stuart Speed. The Dave Taranto Medal, named for a former PBS-RRR comic presenter, is awarded to the "most silly Megahertz". The only living medal is the Stephen Hurley Medal, named for a member of the first Rockdogs side in 1993 who broke his spine in November that year and now uses a wheelchair. The Steve Connolly Medal is awarded for the best on ground, and is presented by The Age sports writer Rohan Connolly in memory of his brother.

The match itself is accompanied by a two-to-three hour long concert, along with entertainment at half time, and usually sees notable acts volunteering their time to entertain the Community Cup audience. Notable performances include Paul Kelly, TISM and Magic Dirt (2004), one-off reunion concerts by Rebecca's Empire and Weddings Parties Anything (2005) and Dave Graney (2006). Paul Kelly returned again to accompany Renée Geyer on harmonica while she sang "Waltzing Matilda" at the 2006 Cup, with state sports minister and former VFL footballer Justin Madden tossing the coin to decide which team was kicking for which goal.