Çorum Province (Turkish: Çorum ili ) is a province in the Black Sea Region of Turkey, but lying inland and having more characteristics of Central Anatolia than the Black Sea coast.

With important archaeological sites going back 5,000 years and a unique natural beauty, Çorum is attractive to visitors.

The province of Çorum is a mixture of mountains and high plateaus, some of it watered by the Kızılırmak and Yeşilırmak rivers. The province includes much attractive high meadow and mountain for walking and excursions from the city and towns. 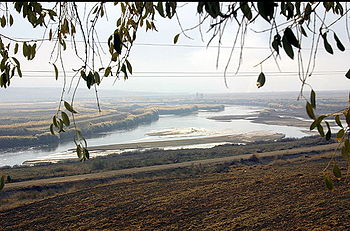 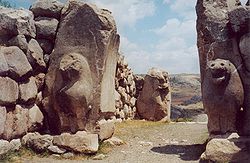 The Lion Gate at Hattusa, Turkey. This was one of the two city gates. The arc is typical for Hittite architecture.

Excavations reveal that Çorum area was inhabited during the Paleolithic, Neolithic period and the 4th stage of the Calcolithic Age. Remains of these periods have been found at Büyük Güllüce, Eskiyapar and Kuşsaray.

In later times Çorum and its environs were dominated by Hittites and in the district of Boğazkale is one of the most important Hittite sites in Anatolia, the UNESCO World Heritage listed Hattusa, the capital of the Hittite Empire from 1700 BC to 1200 BC. Other important Hittite site include the open-air temples at Yazılıkaya and Alacahöyük; royal tombs; and the excavations of Boğazköy including tablets proving tradings links between the Hittites and the Ancient Egyptians.

Then came the other civilizations: Phrygians, who left remains at Pazarlı, north of Çorum;