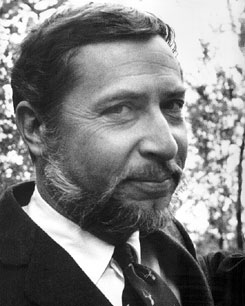 Bernard Heuvelmans (, &ndash; , ) was a -French scientist, explorer, researcher, and a writer probably best known as a founder of . His monumental 1958 book, "" (originally published in French in 1955 as "Sur la Piste des Bêtes Ignorées") is often regarded as one of the best and most influential cryptozoological works.

Heuvelmans was born in , and raised in , and earned a in from the (now split into the and the ). His doctoral dissertation concerned the teeth of the , which had previously defied classification. Though earlier interested in zoological oddities, he credits a 1948 "" article, "There Could be Dinosaurs", by , with inspiring a determined interest in unknown animals. Sanderson discussed the possibility of s surviving in remote corners of the world.

Heuvelmans undertook a massive amount of research and wrote "On the Track of Unknown Animals", considered by some the most influential work of cryptozoology in the twentieth century. After "On the Track", Heuvelmans wrote many other books and articles, few of which have been translated into English. His works sold well among general audiences, but saw little attention from mainstream scientists and experts. "In the Wake of the Sea-Serpents" was his second book translated into English and sold in the United States in 1968. It consisted of his book on , with parts of his book on the (and ) added. As he continued his researches he saw the need to "give a name to the totally new discipline in zoology my research implied. That is how I coined the word 'cryptozoology,' the science of hidden animals." [Jerome Clark, "Unexplained", (Farmington Hills, MI: Visible Ink, 1999), 280-281.]

Heuvelmans searched the world's s for giant s, to substantiate the rumors and s about animals known to local people but still unknown to . In the late 1960s, Heuvelmans helped spread the controversy surrounding the when he examined the "ice man" then in the possession of a road-traveling circus exhibitor. Heuvelmans thought the creature could be genuine and published a formal description, naming it as the new species "Homo pongoides". There was never conclusive evidence given to either substantiate or discredit the Minnesota Iceman, and the idea that it represented a new species of living hominid has never been accepted by mainstream zoologists.

In 1975 Heuvelmans established the Center for Cryptozoology in France, where his library is housed. In 1982 he helped to found the , and served as its first president. He was also the first president of the .

Although much admired and considered "the father of cryptozoology" among cryptozoologists and many general readers, Heuvelmans was also criticized and even ridiculed for his belief in by skeptics, notably Swedish author and naturalist .