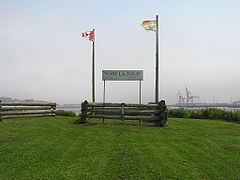 Location of Fort La Tour along the Saint John harbour

In 1610, at the age of 17, Charles arrived at Port-Royal in Acadia with his father, Claude de Saint-Étienne de la Tour, in an expedition that was led by Jean de Biencourt de Poutrincourt who had been one of the original settlers in 1604 at Saint Croix and 1605 at Port-Royal. The habitation had been previously abandoned in 1607 by Biencourt de Poutrincourt and others due to financial troubles. The 1610 expedition also included Poutrincourt's 19-year old son Charles de Biencourt de Saint-Just, and a Catholic priest who set about himself the task of baptizing the local Mi'kmaqs, including their chief Membertou.

In 1613, the settlement, or habitation, at Port Royal was attacked by colonists from Virginia led by Captain Samuel Argall. Several settlers were killed, others taken prisoner and the fort and goods were destroyed. Poutrincourt who had wintered in France to gather supplies returned to Port Royal the next spring. He was forced to return to France with the surviving settlers. The young Biencourt and Charles de la Tour remained, living amongst the Mi'kmaq, engaging in the fur industry. At this time, la Tour migrated from Port Royal to establish himself at both Cap de Sable (present-day Port La Tour, Nova Scotia) and St. John, New Brunswick.}

In 1625, Charles married an Abenaki Indian, from one of the local First Nations' tribes and the family built a trading fort at the mouth of the Penobscot River in present-day Castine, Maine. In 1626, the fort was attacked and destroyed by New England colonists. Charles returned to Port-Royal.

In 1631, Charles had become governor of Acadia and moved to the mouth of the St. John River in present-day Saint John, New Brunswick where he built a new fort. In 1635, he was formally granted a seignory.

Historian MacDonald writes about La Tour's possession at the mouth of this river: [d]own this river highway came fleets of canoes, bringing the richest fur harvest in all Acadia to Charles La Tour's storehouses: three thousand moose skins a year, uncounted beaver and otter. On this tongue of land his habitation stood, yellow-roofed, log-palisaded, its cannon commanding the river and bay (p. 183).

In 1632, Isaac de Razilly the new Lieutenant-general of all New France and governor of Acadia, arrived in Port-Royal, sent by his cousin Cardinal Richelieu. La Tour and Razilly agreed to divide control of Acadia, the latter controlling the south-western corner of Nova Scotia and the territory along the St. John River. Razilly died in 1636, and his successor, Charles de Menou d'Aulnay, began a series of violent and costly confrontations.

During these confrontations, La Tour was accused of treason and crimes against Acadia.

In the Spring of 1643, La Tour led a party of English mercenaries against the Acadian colony at Port Royal. His 270 Puritan and Huguenot troops killed three, burned a mill, slaughtered cattle and seized 18,000 livres of furs.

D’Aulnay was able to retaliate in 1645 by seizing all of La Tour’s possessions and outposts,[2] especially Fort La Tour at St. John and Cape Sable. In the Battle of St. John (1645), La Tour's second wife, Marie Jacquelin La Tour, defended the fort for three days. On April 17, despite losing thirty-three men, d'Aulnay took control of the fort. La Tour's men were sent to the gallows. Madame La Tour was taken prisoner and died three weeks later. Meanwhile, La Tour was in the English port city of Boston, drumming up more support for his cause. Nicolas Denys' letters and journals give vivid descriptions of the drama.[3]

In 1650, d'Aulnay died when his canoe capsized. His widow, Jeanne Motin was heavily in debt. La Tour, hearing of the death of d'Aulnay, returned to France and was rehabilitated, going on to become governor of Acadia once again.