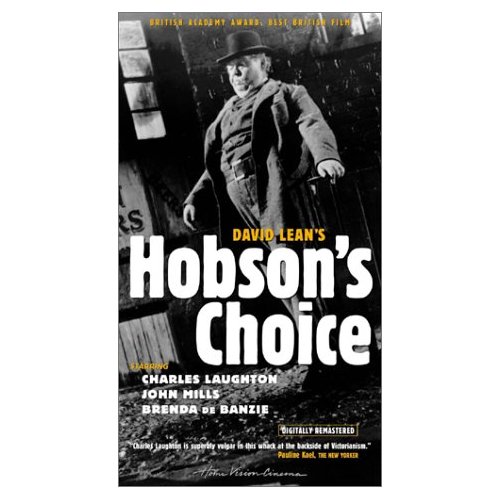 "Hobson's Choice" is a 1954 film directed by , based on the play of the same name by . It stars in the title role of Victorian bootmaker Henry Hobson, as his eldest daughter Maggie and as a timid employee. The film also features a young , in one of her first roles, as daughter Vicky Hobson.

The film's title is an allusion to the '' - that is, no choice at all.

Willie Mossop () is a gifted, but unappreciated shoemaker employed by the tyrannical Henry Horatio Hobson () in his moderately upscale shop in 1880s Salford. Widower Hobson has three daughters. Maggie () and her younger sisters Alice () and Vicky (Prunella Scales) have worked in their father's establishment without wages and are eager to be married and free of the shop. Alice has been seeing Albert Prosser (), a young up-and-coming solicitor, while Vicky prefers Freddy Beenstock (), the son of a respectable corn merchant. Hobson doesn't object to losing Alice and Vickey, but Maggie is far too useful to part with. To his friends, he mocks her as a spinster "a bit on the ripe side" at 30 years of age.

Her pride injured, she bullies the contented, unambitious Will Mossop into an engagement. When Hobson objects to her choice of husband and refuses to start paying her, Maggie decides that she and Willie will set up in a shop of their own. For capital, they turn to a very satisfied customer for a loan. With money in hand, they get married and, between her business sense and his shoemaking genius, the enterprise is very successful. Within a year, he has taken away nearly all of Hobson's clientele. Finally, at Maggie's urging, Mossop goes into partnership with Hobson, now an almost-bankrupt alcoholic, on condition that Hobson take no further part in the business.

* as Henry Horatio Hobson
* as Will Mossop
* as Maggie Hobson
* as Alice Hobson
* as Vicky Hobson
* as Albert Prosser
* as Freddy Beenstock
* as Mrs. Hepworth, the satisfied customer and financial backer
* as Tubby Wadlow, another Hobson employee
* as Jim Heeler
* as Sam Minns
* as Tudsbury
* as Denton
* as Dr. MacFarlane

While some contemporary critics felt that Lean's direction was rather formal and dated, most acclaimed his assured touch; and the acting was seen as successful. [ [http://www.screenonline.org.uk/film/id/468809/index.html screenonline: Hobson's Choice (1953) ] ]