M-66 is a north–south state trunkline highway on the Lower Peninsula (LP) of the US state of Michigan. It runs from the Indiana state line in the south to Charlevoix in the north. M-66 is the only state highway to traverse almost the entire north–south distance of the LP. It starts as a continuation of State Road 9 which provides access to the Indiana Toll Road. The total length is 272.898 miles (439.187 km), which includes 3.374 miles (5.430 km) of freeway between Interstate 94 (I-94) and downtown Battle Creek designated as I-194. One section of the highway is an expressway, a type of divided limited access highway, while the section along I-194 is a full freeway, otherwise M-66 is a two-lane rural highway. Two sections are listed on the National Highway System.

The first usage of the M-66 designation dates back to around July 1, 1919 with the rest of the original state highway system. At the time, the highway only extended between Lowell and Lakeview, a route now covered by M-91. The highway has been lengthened in a series of extensions north and south starting in 1925. A rerouting in 1944–45 removed M-66 from its original 1919 routing to replace another highway south of Six Lakes, the change that spawned M-91. The last big extension in 1965 resulted in the modern trans-peninsular highway route. The last modifications were shorter reroutings in the 1970s.

M-66 runs for 266.399 miles (428.728 km) as an almost entirely a north–south undivided surface highway in western Michigan from the Indiana state line north to Lake Michigan at Charlevoix.[2] Most of the highway is two-lane undivided rural highway. There is a section south of Battle Creek that is a four-lane expressway. Running north into the Cereal City, M-66 is concurrent with I-194, which is a full freeway. This section along I-194 is listed on the National Highway System (NHS), a system of highways important to the nation's economy, defense, and mobility.[3][4] Another section of M-66 is included on the NHS where it is concurrent with either M-72 or U.S. Highway 131 (US 131) in Kalkaska or Antrim counties.[5]

M-66 is a four-lane highway that connects with State Road 9 (SR 9) at the Indiana state line in southern St. Joseph County. The highway runs north to Sturgis through farm land where it turns east through town running concurrently with US 12 on Chicago Road.[6] As it leaves Sturgis to the north it crosses a branch of the Michigan Southern Railroad,[7] and it becomes a two-lane surface highway along Nottawa Street. The highway runs near several small lakes and crosses the Nottawa Creek before meeting M-86. The two highways run north–south concurrently for about 1.9 miles (3.1 km) along the Nottawa–Colon township line. Farther north, M-66 crosses the St. Joseph River and meets M-60. M-60/M-66 run together to the east, turning northeasterly in Leonidas running parallel to Nottawa Creek and crossing into the northwest corner of Branch County. M-60 and M-66 separate west of Union City, and M-66 turns north into Calhoun County.[6][8]

Running through woodland terrain in southern Calhoun County, M-66 passes through Athens, along Graham Lake and continues to the outskirts of Battle Creek. The highway widens first to a four-lane, limited access expressway south of the Lakeview Square Mall before becoming a full freeway at the interchange with I-94. It is at the transiton to freeway that M-66 starts its concurrency with I-194.[6] I-194/M-66 is known as the Sojourner Truth Downtown Parkway,[9] but the locals still use the former semi-official[a] nickname, "The Penetrator".[11] The southern section of the freeway has the highest traffic levels along M-66 as measured by average annual daily traffic (AADT) in the survey conducted in 2009. The Michigan Department of Transportation (MDOT) calculates the AADT value as a tally of the average number of vehicles using a given stretch of roadway. I-194/M-66 carried 25,200 vehicles on the average day during the year;[12] 980  trucks were included in that traffic.[13] The freeway continues 3.374 miles (5.430 km) north into downtown Battle Creek along part of the Kalamazoo River and crossing a branch of the Canadian National Railway and Norfolk Southern Railway[7] before ending at the at-grade intersection with Hamblin Avenue. I-194 ends, and M-66 continues northeast out of the Cereal City on Division Street and then northeast on Capital Avenue along the Battle Creek River.[6][8]

M-66 continues northward through Barry County on Capital Avenue which becomes 9 Mile Road north of Baseline Road. The highway passes through Assyria before meeting M-79, with which it has a short concurrency, in Nashville. On the north side of the village, M-66 crosses the Thornapple River and continues north through mixed rural forest land and farm fields. Near Woodland, M-66 joins M-43 and the two run to the northeast and along the Barry–Eaton county line. M-43/M-66 meets M-50 at a four-way intersection southwest of Lake Odessa near Woodbury, and M-43 turns east leaving M-66 in favor of a concurrency with M-50. M-66 crosses a rail line of CSX Transportation and the county line on State Road. It meets I-96 in a rural southern part of the Ionia County south of Ionia. On the south edge of town, the highway passes the county airport and curves to the northeast becoming Dexter Street. While entering downtown Ionia, the trunkline crosses the Grand River and the mainline of the Grand Rapids Eastern Railroad near the county fairgrounds. M-66 turns west along M-21 (Lincoln Avenue) for two blocks before turning back to the north along State Street. The trunkline runs through the northern part of the county and meets M-44's eastern terminus near Woodard Lake.[6][8]

In Montcalm County, M-66 intersects M-57 in a rural area south of Sheridan before running north on Sheridan Road through Stanton. The highway jogs west along Main Street in Stanton before returning to a northerly course on a discontinuous section of Sheridan Road. The roadway curves around the west end of Hemmingway Lake near Cannonsville Road. West of Edmore, M-66 turns northwesterly along M-46 on Edmore – Howard City Road to Six Lakes. M-66 separates there and returns to its northerly journey along Six Lakes Road between Little Bass Lake and First Lake. The road crosses into Mecosta County as 30th Avenue north of Six Lakes. The highway intersects M-20 at the intersection with 9 Mile Road in Remus. This area of rural Mecosta County is more heavily forested with rolling hills and sporadic farms. In Barryton, the roadway crosses the Chippewa River. M-66 continues north passing Merrill Lake before crossing into rural eastern Osceola County at Mesceola Road.[6][8]

The highway meets US 10 near Sears after crossing the Pere Marquette State Trail. M-66 crosses the Muskegon River near a separate 9 Mile Road in Osceola County. It meets both M-115 and M-61 (16 Mile Road) south of Marion.[6][8] The highway continues north and crosses the Great Lakes Central Railroad for the first time in Marion.[7] The trunkline turns onto Burkett Road as crosses into Wexford County and then turns westward on Stoney Corners Road into McBain through farm land. In town it runs along Maple Street and then runs north toward Lake City on Morey Road. South of the Lake City, M-55 runs concurrently with M-66 by Missaukee Golf Course and into town along the eastern shore of Lake Missaukee. North of town, M-55 splits off to the east on Houghton Lake Road, and M-66 continues north to an intersection with the eastern terminus of M-42 in a rural forest. M-66 leaves Morey Road and follows Pioneer Road to the county line.[6][8]

At Smithville, the highway crosses into Kalkaska County and crosses the Manistee River. M-66 runs through rolling hills in woodlands through the unincorporated farming community of Lodi north to an intersection with M-72. The two highways travel west together over the Great Lakes Central Railroad before turning north and merging with US 131 on a route parallel to the rail line. US 131/M-66/M-72 follows and crosses a branch of the Boardman River along Cedar Street through downtown Kalkaska. North of the central business district, M-72 separates to the west and US 131/M-66 crosses through the Pere Marquette State Forest on the way to Antrim and Mancelona in Antrim County. The highway follows Williams Street through the twin towns, meeting the southern terminus of M-88 and western terminus of C-38 at the intersection with State Street in Mancelona. M-66 separates from US 131 and follows Mancelona – East Jordan Road out of town.[6][8]

The section of M-66 north of the US 131 split had the highway's lowest AADT levels in the 2009 survey. MDOT reported that only 1,500 vehicles use this stretch of road in 2009.[14] Of these vehicles, only were 140 trucks that used the segment of highway in 2009.[15] The highway meanders through more forest lands through the community of Green River to East Jordan. M-66 follows Lake Street and turns to follow the western shore of the South Arm of Lake Charlevoix. The roadway turns inland through Ironton before returning to the lakeshore the rest of the way to Charlevoix. M-66 ends at an intersection with US 31 south of downtown next to Lake Michigan.[6][8]

MDOT provides a number of different services to motorists traveling along the state trunkline highway system. Along M-66, there are six different carpool lots located near Nashville, Woodland, Belding, Sheridan, Sears and Marion. There are additional services provided to travelers in the form of roadside parks and rest areas. There are two roadside parks along the highway, one is between Woodland and Woodbury, and the second is in Sheridan.[6] The roadway also provides access to the Ionia State Recreation Area and a state harbor on Lake Charlevoix.[16] 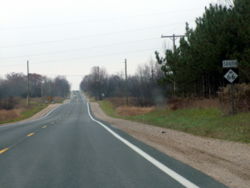 The MSHD completed a major rerouting of M-66 around 1944–45. The M-14 designation of the time was decommissioned and replaced with M-66. Starting at Six Lakes, M-66 turned west along M-46 instead of east and then turned south through Stanton and Ionia ending north of Battle Creek. The highway between Lowell and Lakeview was redesignated as M-91.[24] A minor realignment in late 1950 removed two 90° curves near the Osceola–Missaukee county line and replaced them with a pair of sweeping curves.[25][26]

M-66 was extended southerly from Assyria through Battle Creek to the Indiana state line replacing sections of M-78 in 1965. M-66 turned south and west along M-60 and new highway to Colon. The segment of former M-78 not used by M-66 was transferred to local control. The final section of M-78's roadway given to M-66 extended it all the way to the state line, resulting in a north–south trans-peninsular highway from Lake Michigan near Charlevoix to Indiana.[34][35] M-66 is the only such highway to run the length of the Lower Peninsula.[6] The next year, M-66 was rerouted through Battle Creek to use the completed I-194 freeway.[35][36]