Mosaic (web browser)
This article is about the browser produced by NCSA. For the browser that was later renamed, see Netscape Navigator. 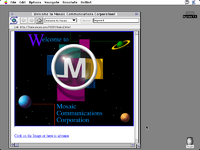 Mosaic is the web browser credited with popularizing the World Wide Web. It was also a client for earlier protocols such as FTP, NNTP, and gopher. Its clean, easily understood user interface, reliability, Windows port and simple installation all contributed to making it the application that opened up the Web to the general public.[3] Mosaic was also the first browser to display images inline with text instead of displaying images in a separate window.[4] While often described as the first graphical web browser, Mosaic was preceded by the lesser-known Erwise[5] and ViolaWWW.

Mosaic was developed at the National Center for Supercomputing Applications (NCSA)[4] at the University of Illinois Urbana-Champaign beginning in late 1992. NCSA released the browser in 1993,[6] and officially discontinued development and support on January 7, 1997.[7] However, it can still be downloaded from NCSA.[8]

Fifteen years after Mosaic's introduction, the most popular contemporary browsers, Internet Explorer, Mozilla Firefox and Google Chrome, retain many of the characteristics of the original Mosaic graphical user interface (GUI) and interactive experience.

Netscape Navigator was later developed by James H. Clark and many of the original Mosaic authors; however, it intentionally shared no code with Mosaic. Netscape Navigator's code descendant is Mozilla.[9]

David Thompson tested ViolaWWW and showed the application to Marc Andreessen.[10] Andreessen and Eric Bina originally designed and programmed NCSA Mosaic for Unix's X Window System called xmosaic[4][6][10][11] Funding for the development of Mosaic came from the High-Performance Computing and Communications Initiative, a program created by the High Performance Computing and Communication Act of 1991.[12]

Development of Mosaic began in December 1992. Versions 0.1–0.9 were the first developed and released.[13] Version 1.0 was released on April 22, 1993, followed by two maintenance releases during summer 1993. A port of Mosaic to the Commodore Amiga was available by October 1993. Ports to Windows and Macintosh were released already in September.[10] Version 2.0 of NCSA Mosaic was released in December 1993, along with version 1.0 releases for both Windows. An Acorn Archimedes port was underway in May 1994.[citation needed]

The licensing terms for NCSA Mosaic were generous for a proprietary software program. In general, non-commercial use was free for all versions (with certain limitations). Additionally, the X Window System/Unix version publicly provided source code (source code for the other versions was available after agreements were signed). Despite persistent rumors to the contrary, however, Mosaic was never released as open source software during its brief reign as a major browser; there were always constraints on permissible uses without payment.

Spyglass licensed the technology and trademarks from NCSA for producing their own web browser but never used any of the NCSA Mosaic source code.[14] Microsoft licensed Spyglass Mosaic in 1995 for US$2 million, modified it, and renamed it Internet Explorer.[15] After a later auditing dispute, Microsoft paid Spyglass $8 million.[16][15] The 1995 user guide The HTML Sourcebook: The Complete Guide to HTML, specifically states in a section called Coming Attractions, that Explorer "will be based on the Mosaic program" (p. 331). Versions of Internet Explorer before version 7 stated "Based on NCSA Mosaic" in the About box. Internet Explorer 7 was audited by Microsoft[citation needed] to ensure that it contained no Mosaic code, and thus no longer credits Spyglass or Mosaic.

Other browsers existed during this period, notably Erwise, ViolaWWW, MidasWWW, tkWWW and Cello. These browsers, however, would not have the same effect as Mosaic on public use of the Internet.[17]

In the October 1994 Issue of Wired, Gary Wolfe notes in the article, "The (Second Phase of the) Revolution Has Begun: Don't look now, but Prodigy, AOL, and CompuServe are all suddenly obsolete - and Mosaic is well on its way to becoming the world's standard interface": 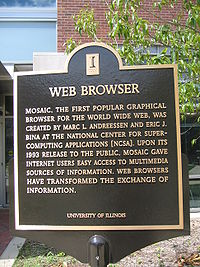 Mosaic was the web browser which led to the Internet boom of the 1990s. Robert Reid underscores this importance stating, "while still an undergraduate, Marc wrote the Mosaic software ... that made the web popularly relevant and touched off the revolution" (p.xlii). Reid notes that Andreessen's team hoped:

... to rectify many of the shortcomings of the very primitive prototypes then floating around the Internet. Most significantly, their work transformed the appeal of the Web from niche uses in the technical area to mass-market appeal. In particular, these University of Illinois students made two key changes to the Web browser, which hyper-boosted its appeal: they added graphics to what was otherwise boring text-based software, and, most importantly [sic], they ported the software from so-called Unix computers that are popular only in technical and academic circles, to the Windows operating system, which is used on more than 80 percent of the computers in the world, especially personal and commercial computers. (p.xxv).

Mosaic was not the first web browser for Windows; this was Thomas R. Bruce's little-known Cello. The Unix version of Mosaic was already making it famous before the Windows and Mac versions came out. Other than displaying images embedded in the text rather than in a separate window, Mosaic did not in fact add many features to the browsers on which it was modeled, like ViolaWWW.[4] But Mosaic was the first browser written and supported by a team of full-time programmers, which was reliable and easy enough for novices to install, and the inline graphics proved immensely appealing. Mosaic made the Web accessible to the ordinary person for the first time and had already 53% market share in 1995.[19]

Reid also refers to Matthew K. Gray's well-respected website, Internet Statistics: Growth and Usage of the Web and the Internet, which indicates a dramatic leap in web use around the time of Mosaic's introduction (p.xxv).

In addition, David Hudson concurs with Reid, noting that:

Marc Andreessen's realization of Mosaic, based on the work of Berners-Lee and the hypertext theorists before him, is generally recognized as the beginning of the web as it is now known. Mosaic, the first web browser to win over the Net masses, was released in 1993 and made freely accessible to the public. The adjective phenomenal, so often overused in this industry, is genuinely applicable to the... 'explosion' in the growth of the web after Mosaic appeared on the scene. Starting with next to nothing, the rates of the web growth (quoted in the press) hovering around tens of thousands of percent over ridiculously short periods of time were no real surprise (p.42).

Ultimately, web browsers such as Mosaic became the killer applications of the 1990s because they were the first programs to provide a multimedia graphical user interface to the Internet's burgeoning wealth of distributed information services (formerly limited to applications such as FTP, Usenet and Gopher). This was also a time when access to the Internet was expanding rapidly outside its previous domain of academia and large industrial research institutions.

Mosaic's popularity as a separate browser began to lessen upon the release of Andreessen's Netscape Navigator in 1994. This was noted at the time in The HTML Sourcebook: The Complete Guide to HTML.[21]

By 1998 its user base had almost completely evaporated, being replaced by other web browsers. After NCSA stopped work on Mosaic, development of the NCSA Mosaic for the X Window System source code was continued by several independent groups. These independent development efforts include mMosaic (multicast Mosaic)[22] which ceased development in early 2004, and Mosaic-CK and VMS Mosaic which are both under active development as of July 2010.

Mosaic was based on the libwww library[23][24][25] and thus supported a wide variety of internet protocols included in the library: Archie, FTP, gopher, HTTP, NNTP, telnet, WAIS.[6]