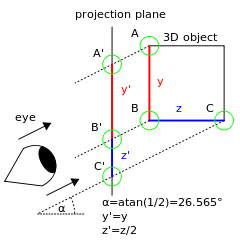 Oblique projection with foreshortening by half, seen from the side.

Oblique projection is a type of parallel projection:

Mathematically, the parallel projection of the point (x,y,z) on the xy-plane gives (x + az,y + bz,0). The constants a and b uniquely specify a parallel projection. When a = b = 0, the projection is said to be "orthographic" or "orthogonal". Otherwise, it is "oblique". The constants a and b are not necessarily less than 1, and as a consequence lengths measured on an oblique projection may be either larger or shorter than they were in space. In a general oblique projection, spheres of the space are projected as ellipses on the drawing plane, and not as circles as you would expect them from an orthogonal projection.

Oblique drawing is also the crudest "3D" drawing method but the easiest to master. Oblique is not really a 3D system but a 2 dimensional view of an object with 'forced depth'. One way to draw using an oblique view is to draw the side of the object you are looking at in two dimensions, i.e. flat, and then draw the other sides at an angle of 45 degrees, but instead of drawing the sides full size they are only drawn with half the depth creating 'forced depth' - adding an element of realism to the object. Even with this 'forced depth', oblique drawings look very unconvincing to the eye. For this reason oblique is rarely used by professional designers and engineers.

In an oblique pictorial drawing, the angles displayed among the axes, as well as the foreshortening factors (scale) are arbitrary. More precisely, any given set of three coplanar segments originating from the same point may be construed as forming some oblique perspective of three sides of a cube. This result is known as Pohlke's theorem, from the German mathematician Pohlke, who published it in the early 19th century.[1]

The resulting distortions make the technique unsuitable for formal, working drawings. Nevertheless, the distortions are partially overcome by aligning one plane of the image parallel to the plane of projection. Doing so creates a true shape image of the chosen plane. This specific category of oblique projections, whereby lengths along the directions x and y are preserved, but lengths along direction z are drawn at angle using a reduction factor is very much in use for industrial drawings.

In cavalier projection (sometimes cavalier perspective or high view point) a point of the object is represented by three coordinates, x, y and z. On the drawing, it is represented by only two coordinates, x" and y". On the flat drawing, two axes, x and z on the figure, are perpendicular and the length on these axes are drawn with a 1:1 scale; it is thus similar to the dimetric projections, although it is not an orthographic projection, as the third axis, here y, is drawn in diagonal, making an arbitrary angle with the x" axis, usually 30 or 45°. The length of the third axis is not scaled.[3][4]

It is very easy to draw, especially with pen and paper. It is thus often used when a figure must be drawn by hand, e.g. on a black board (lesson, oral examination).

The representation was initially used for military fortifications. In French, the « cavalier » (literally rider, horseman, see Cavalry) is an artificial hill behind the walls that allows to see the enemy above the walls.[5] The cavalier perspective was the way the things were seen from this high point. Some also explain the name by the fact that it was the way a rider could see a small object on the ground from his horseback.[6]

The term cabinet projection (sometimes cabinet perspective) stems from its use in illustrations by the furniture industry.[citation needed] Like cavalier perspective, one face of the projected object is parallel to the viewing plane, and the third axis is projected as going off in an angle (typical 30° or 45°). Unlike cavalier projection, where the third axis keeps its length, with cabinet projection the length of the receding lines is cut in half.

As formula, if the plane facing the viewer is xy, and the receding axis is z, then a point P is projected like this:

Where α is the mentioned angle.

The transformation matrix is:

Besides technical drawing and illustrations, video games (especially those preceding the advent of 3D games) also often use a form of oblique projection. Examples include SimCity, Ultima VII, EarthBound, and Paperboy.