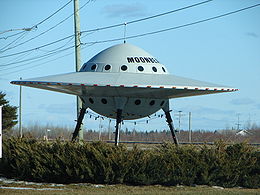 Moonbeam is a township in Ontario, Canada, located in Cochrane District. It had a population of 1201 in the 2001 census, a decline of 9% from 1996.[2] It was named after Moonbeam Creek.

The township is located south of René Brunelle Provincial Park, between the communities of Fauquier and Kitigan. It is known for its roadside flying saucer, which is also featured prominently in promotional material.

Origin of the name Moonbeam

The name "Moonbeam" is attributed to early pioneers who allegedly witnessed flashing lights falling from the sky, which they called "moonbeams". These lights fell down or reflected in a creek that flows west from Strickland to Rémi Lake and was called Moonbeam Creek. These lights could have been Northern Lights that often appear with the moon light.[3]

Another suggestion is that the name came from the passengers on the Transcontinental Railway, who would be traveling for many miles through dark forests and when they came to the natural clearing near Moonbeam would be struck by the brilliance of the moon-lit snow. Nevertheless, there is no documented proof of the exact source of this name.[3]

Rémi Lake was named after a Great Trunk Pacific Railway worker who drowned there in 1905.

The Canadian Transcontinental Railway, connecting Quebec City with the Canadian Prairies, was completed by 1912 and provided new access to agricultural land and natural resources of northern Ontario. This attracted colonizers from Montreal, Sainte-Agathe, and Saint-Jovite, to the Moonbeam area, looking for land to cultivate or mine.[3]

Mayors from incorporation in 1922 to present:[4]