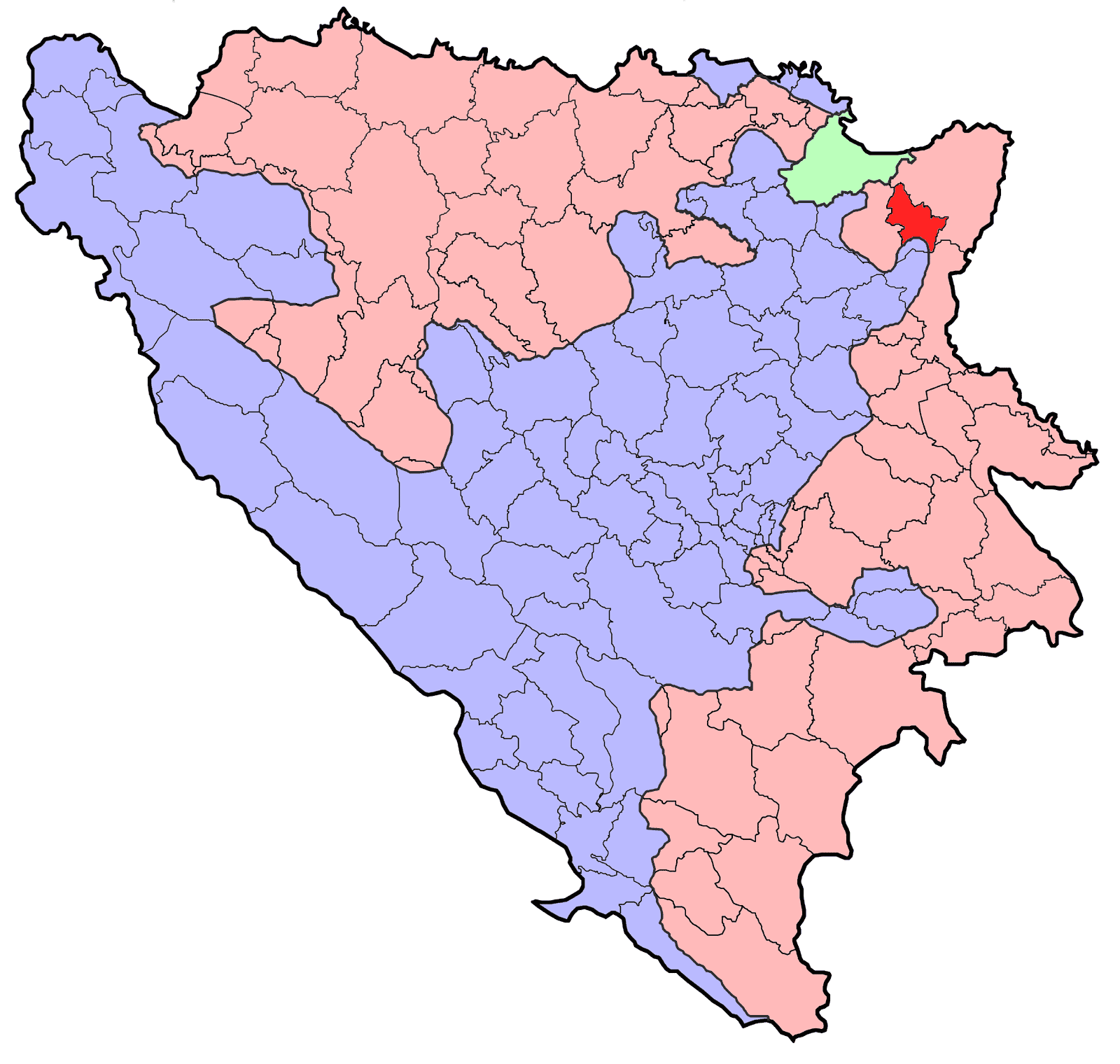 Ugljevik (: Угљевик) is a municipality and town of the same name in northeast . The municipality located in the eastern foothills of Mount Majevica, in picturesque countryside, where wondrous and beautiful mountain starts descending towards the flatlands of , to which it is tied more than any other surrounding area. The center of the municipality is the town of Ugljevik, the most sunbathed and modern of communities in . This is the home of miners and other energy resource professionals.

Ugljevik was named for the “ugalj in Serbian” which began to be organizely exploited on Mount in 1899.

production has been exploited on Mount since 1899. Within a century, the Majevicans developed the initial small dig into today’s giant surface mine producing 6,000 s of coal per day and the giant coal-fired power plant “Termoelektrana Ugljevik” (), supplying the Republic with 300 s of . Preparations are underway for the construction of another power-plant of 600 MW. Exploration indicates huge reserves of quality coal, with seams stretching in every direction, even reaching on the river. The administrative center of the Municipality was the village of Zabrdje, to be transferred to the mining community of Ugljevik (now named Stari Ugljevik (Old Ugljevik)) in 1941, after Zabrdje was burned by . The present-day Ugljevik began to be built in 1980 in the valley of Janja river (one of the ’s tributaries) between Zabrdje, Stari Ugljevik and Bogutovo Selo, in answer to the need for increasing the surface mining operations and building the power-plant. The whole of the old Ugljevik was then moved to this new site. At least ten archaeological archaeological locations have been found in the area. These includes five locations with groupings of stone sarcophagi, called "stecci" in Serbian, and three dating from the Roman period. Though research into sites in the Municipality is lacking, near-by areas have Neolithic archaeological sites, allowing pòstulation that there may have been ancient sites present. The village of Tutnjevac contains the remains of a Roman villa.

The first population census of the region showed five settlements with a total of 55 houses, which date from prior to arrival of Osmanli Turks in the 15th century. During troubled times the population would leave these parts with most of the succeeding population&mdash;the forbears of the present Majevicans&mdash;coming from Eastern and ‘Old’ in the 19th century.

During the Bosnian civil war, the Ugljevik Serbs duly participated in the Army of Republic of Srpska and have given some of the greatest heroes of the nation to this cause, most notably, Mitar Maksimovic-Mando and colonel Milan Jovic. There is a large monument in the centre of Ugljevik, at the administrative building of the Termoelektrana .

During the past hundred years, the pace and extend of development of the Ugljevik region has been determined by coal production. With the increased need for , coal exploitation began in 1899, and a was built from , on the river, to the Ugljevik coal-mine via Bijeljina in 1919. Subsequently this railway was upgraded to normal narrow gauge, and later was connected to one of Ugljevik’s communities, Mezgraja, in 1938. This was the last railway in the Europe before it was closed in , .

The coal from Bogutovo Selo surface mine has a calorific value of 2,550 kcal/kg (10.68 MJ/kg), and it is estimated that the reserves are sufficient to satisfy the needs of four 300 coal-fired power plants.

It is thanks to these coal giants that almost all of Ugljevik’s corporations developed.

After the Ugljevik became a significant peacekeeping force post. For the first time after the , Russian (then Soviet) Army and Western Allies worked together in a military mission, as Implementation Force () and later Stabilization forces (). Headquarters of Russian Peacekeeping Mission in Bosnia was in Ugljevik. Americans had a small base in Ugljevik, across the Janja river from the Russians. In relation to this, IFOR info magazine “Talon” wrote in one of its issues “Cold War melted on the Balkan sun”.

Ugljevik is located on the inter-Entity - highway&mdash;built in 1971&mdash;which connects it to all the surrounding regions, with asphalt roads branching off the highway towards Zabrdje, Trnova and other communities. It is now possible to reach every village in Ugljevik municipality by car. This, coupled with other circumstances&mdash;primarily the fine infrastructure, employment opportunities, healthy environment and proximity to populous towns&mdash;contribute to the municipality’s towns developing quickly and the residents choice to remain in them. Despite the destruction of the recent war and the postwar hardships of recovery, new houses are replacing old at every step.

Both the municipality and the town are overwhelmingly populated by . As a population census has not been conducted in since 1991, the exact demographic breakdown is unknown and all information is subject to error.

The town itself had a population of 2,981 with:

* Romas (Gypsies) were majority in settlement of Jasenje.

Today, most of villages with muslim majority is part of municipality of .

Before the war, the municipality included the Bosnian Muslim (Bosniak) village of , located several miles to the south of Ugljevik, which did not become a part of , and is therefore not part of Ugljevik municipality today. Teocak municipality has a population estimated at 9,000 (believed to be 100% bosniak).

"On the eastern slopes, on the border of the Municipality – whence as through on the palms of one’s hands are visible the flatlands beetwen two rivers, rise in the distance the peaks of Mounts and , and ()&mdash;is located Gornja Trnova, the birthplace of the greatest of Serbian bards, the blind epic poet . Born at "Vilića Guvno", the great poet has been called by other poets the Serbian Homer. Witness to great historical events of exceptional significance to the Serbian nation, the bard immortalized these events in epic grandeur."

Culture in these parts is gaining momentum. Numerous cultural events are presented at the Cultural Center."Cultural Club Rudar" was founded in 1976 and in the composition of the club work: folk dance ensemble, drama and recitation section, original (authentic) creative work, folk music orchestra. With its good programme the Club takes part in all important manifestations in the municipality and economy collectives and they also often had their performances in other municipalities.

Building of "Cultural Center “Filip Višnjić”" was opened in 2006, and it is replica of Mine Head Office („"Direkcija"“ building) in Stari Ugljevik. Original building was built in 1921, but due to removal of Ugljevik on new location it was abandoned. New building is a center of rich cultural life in municipality and region.

Religion assumed its proper place in the last decade among the lives of the local populace. In addition to the existing churches in Zabrdje, Tutnjevac, Stari Ugljevik, which all shared the fate of their faithful, new Orthodox churches are being built. The most impressive one is in Ugljevik, dedicated to the protesters of Ugljevik and the Municipality, Holy Mother Paraskeva. The church was built in the traditional Serbian-Byzantine Church style, and dominates the town.

Education has a long tradition in the Municipality of Ugljevik. An elementary school was founded in Zabrdje in 1875. The town was at the time the largest settlement in this part of Majevica, since it was located on the - road. In the year of 1995 town marked the 120th anniversary of its school, making Zabrdje, one of privileged communities of and to have their own school for quite some time.

The second school to open in these parts began lesson in 1890 in Korenita. It was followed two years later by the opening of a school in Ugljevik. After the , village schools appeared in other Ugljevik communities&mdash;Tutnjevac, Malesevci, Trnova, Mezgraja, Bogutovo Selo, Ugljevicka Obrijez and other communities. All school-age children attend classes. School building are modern and well equipped, with an adequate number of teachers ensuring a high standard of education. Two thousand pupils attend Ugljevik Municipality schools each year.

Ugljevik also has a Secondary School training future energy technicians, covering the trades needed most by the Ugljevik Termoelektrana (Power Plant). Despite a number of Ugljevik students attending school in secondary schools, and vice-versa, Ugljevik still has 600 students.

The Ugljevik region is rich in natural beauty and rarities. The now evaporated had once reached above New Ugljevik, its waves cutting into the mountainside above the school complex where fossilised traces of aquatic flora and fauna are visible. Above Old Ugljevik lie the Medieval remains of the fortress Jablangrad. From its cliffs, reaching to 451 m above sea level, can be had the best view of the flatlands of , while beyond, across the , through the morning fog, are discernible and Mount .Udrigovo Peak, where a radio-TV relay tower was built after the war, rises like a sentinel above the Ugljevik region. Udrigovo is famous for its thick stands.Majevica’s hills are rich in forests, with the being famous in Udrigovo. Plans are therefore being made to protect the forests and natural beauty of the region and the Nature Reserves in Bogutovo Selo and Lazarevici, while maintaining lumber production. These are also the conditions necessary to the development of recreation and various forms of tourism in the region. This should be kept in mind when planning to expand surface coal exploitation or build new roads. Forest of , and other varieties can be found at Bogutovo Selo, Korenita and Lazarevic, as elsewhere.

Land use is very significant feature of the documents on the developments on the development of the Municipality, dealing with natural resources preservation, mineral exploitation, and urbanization. Judging by this, one can with justification expect the region’s communities to be even more accommodating to contemporary life while offering the amenities of natural surroundings.

There are many varieties of and grown locally, thus lending every village with exploit village .

The village of Krćina, in the direction of , has great potential for the development of village , it being located in beautiful natural surroundings and possessing a respectable cave nearby know by the local population as the cave of the epic hero "Starina Novak". Nearby is also located the , dating to Middle Ages. The village is accessible from the , from the direction of , , , and . The road is partly macadam, and once fully asphalted it will be the shortest way to reach Ugljevik and from .

In the valley of the little river Domana is located another cave, the "Suplja Pecina", while in the cliff on Baljak hill is "Kurtina Pecina".

Sport and physical culture are on the rise in Ugljevik. The pride of these parts is the Football Club Rudar, which has won the most important trophies and titles in and spread the name of Ugljevik throughout the Republic. The Club is a wellspring of talented players, and its successes have inspired the development of soccer in neighbour municipalities as well. Village soccer clubs and school soccer teams have increased and improved their programmes also.

and other sports are on the rise. Great attention is being paid the construction of sports facilities&mdash;soccer stadium, swimming pool, universal gym&mdash;while minor sports facilities are available for the youth in the vicinity of the elementary and secondary schools.

The Rudar Club is a young s club, but this does not prevent it from achieving high results in numerous domestic and international karate meets. Competition began with county and regional meets, to finally progress to the world karate scene, it being of exceptional quality past years.

The Rudar Club was founded in 1984 and belongs to the Prime League of Republika Srpska. The club stopped operating in 1989, to renew itself in 1994 with great strides towards the Republic’s basketball elite.

Rudar is also the name of club, which, through its competitions and work at popularising this ancient game, proudly represents the name of Rudar.

, and are also represented in Rudar sport’s family.