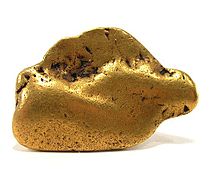 An Alaska gold nugget weighing 63.8 grams. Gold nuggets are often formed through the cold welding of smaller particles which impact as they are carried along water currents

Cold or contact welding is a solid-state welding process in which joining takes place without fusion/heating at the interface of the two parts to be welded. Unlike in the fusion-welding processes, no liquid or molten phase is present in the joint.

Cold welding was first recognized as a general materials phenomenon in the 1940s. It was then discovered that two clean, flat surfaces of similar metal would strongly adhere if brought into contact under vacuum. Newly discovered micro-[1] and nano-scale cold welding [2] has already shown great potential in latest nanofabrication process.

Applications include wire stock and electrical connections (such as Insulation-displacement connectors).

Many gold nuggets are formed by cold welding in nature since gold has no protective oxide skin to inhibit junction formation. They form in streams and rivers by impact action from stones carried by the flow of water on the tiny flakes of gold washed from deposits upstream. Owing to the high density of gold, they tend to remain in pockets in the bed of the stream where further flakes are thrown and aggregate with the growing nuggets. Such nuggets can grow to very large sizes and are highly prized by prospectors.

Mechanical problems in early satellites were sometimes attributed to cold welding. However, in 2006, Henry Spencer stated that the phenomenon of spontaneous cold welding in outer space is "basically a myth", pointing out that "there are no documented cases of it actually occurring in orbit, except in experiments deliberately designed to provoke it (with susceptible materials, great care to avoid contamination, and deliberate mechanical removal of oxide layers, etc.)."[3]

Three years following this 2006 post the European Space Agency published a peer reviewed paper detailing why cold welding is a significant issue that spacecraft designers need to carefully consider. The conclusions of this appropriately titled study can be found on page 25 of "Assessment of Cold Welding between Separable Contact Surfaces due to Impact and Fretting under Vacuum". The paper also cites a documented example from 1991 with the Galileo spacecraft high-gain antenna (see page 2; the technical source document from NASA regarding the Galileo spacecraft is also provided in a link here). [4] [5]

One source of difficulty is that cold welding does not exclude relative motion between the surfaces that are to be joined. This allows the broadly defined notions of galling, fretting, sticking, stiction and adhesion to overlap in some instances. For example, it is possible for a joint to be the result of both cold (or "vacuum") welding and galling (and/or fretting and/or impact). Galling and cold welding, therefore, are not mutually exclusive.

Unlike cold welding process at macro-scale which normally requires large applied pressures, scientists discovered that single-crystalline ultrathin gold Nanowires (diameters less than 10 nm) can be cold-welded together within seconds by mechanical contact alone, and under remarkably low applied pressures [6]. High-resolution transmission electron microscopy and in situ measurements reveal that the welds are nearly perfect, with the same crystal orientation, strength and electrical conductivity as the rest of the nanowire. The high quality of the welds is attributed to the nanoscale sample dimensions, oriented-attachment mechanisms and mechanically assisted fast surface diffusion. Nanoscale welds were also demonstrated between gold and silver, and silver and silver, indicating that the phenomenon may be generally applicable and therefore offer an atomistic view of the initial stages of macroscopic cold welding for either bulk metals or metallic thin film[1].