The August 1998 bombings of Afghanistan and Sudan (codenamed Operation Infinite Reach by the United States) were American cruise missile strikes on terrorist bases in Afghanistan and a pharmaceutical factory in Sudan on August 20, 1998. The attack was in retaliation for the bombings of American embassies in Kenya and Tanzania which killed 224 people (including 12 Americans) and injured 5,000 others.

The missiles were launched from US warships in the Red Sea. Several hit the Al-Shifa pharmaceutical factory, which the United States claimed was helping Osama bin Laden, the mastermind of the embassy attacks, build chemical weapons. One man was killed and ten were wounded in Sudan by the strike.

Then United States National Security Council advisor Richard Clarke stated that intelligence existed linking Osama bin Laden to Al-Shifa's current and past operators, namely the Iraqi nerve gas experts and the National Islamic Front in Sudan.[2] The government of Sudan demanded an apology from both the Bill Clinton and George W. Bush administrations; but none has been given, since U.S. intelligence still believes the plant had ties to chemical weapons. According to testimony by William Cohen, "...the U.S. intelligence community obtained physical evidence from outside the al-Shifa facility in Sudan that supported long-standing concerns regarding its potential role in Sudanese chemical weapon efforts that could be exploited by al Qaeda."[3]

Officials later acknowledged, however, that "the evidence that prompted President Clinton to order the missile strike on the Shifa plant was not as solid as first portrayed." Indeed, officials later said that there was no proof that the plant had been manufacturing or storing nerve gas, as initially suspected by the Americans, or had been linked to Osama bin Laden, who was a resident of Khartoum in the 1990s."[4]

The Al-Shifa factory was Sudan's primary source of pharmaceuticals, covering the majority of the Sudanese market. Werner Daum (Germany's ambassador to Sudan 1996–2000) wrote an article in which he estimated that the attack "probably led to tens of thousands of deaths" of Sudanese civilians.[5] The U.S. Bureau of Intelligence and Research wrote a report in 1999 questioning the attack on the factory, suggesting that the connection to bin Laden was not accurate; James Risen reported in the New York Times:

"Now, the analysts renewed their doubts and told Assistant Secretary of State Phyllis Oakley that the C.I.A.'s evidence on which the attack was based was inadequate. Ms. Oakley asked them to double-check; perhaps there was some intelligence they had not yet seen. The answer came back quickly: There was no additional evidence. Ms. Oakley called a meeting of key aides and a consensus emerged: Contrary to what the Administration was saying, the case tying Al Shifa to Mr. bin Laden or to chemical weapons was weak."[6]

The Chairman of El Shifa Pharmaceutical Industries, who is critical of the Sudanese government, more recently told reporters, "I had inventories of every chemical and records of every employee's history. There were no such [nerve gas] chemicals being made here."[7] Sudan has since invited the U.S. to conduct chemical tests at the site for evidence to support its claim that the plant might have been a chemical weapons factory; so far, the U.S. has refused the invitation to investigate. Nevertheless, the U.S. has refused to officially apologize for the attacks.[4]

Attack on camps in Afghanistan 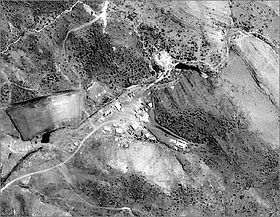 About 75 cruise missiles were fired by the US into the Islamic Emirate of Afghanistan at four Afghan training camps, Al Farouq training camp, Muawai camp run by the Pakistani Harkat-ul-Mujahideen to train militants to fight Indian troops in Kashmir, not Americans.[9][10] and another in the Jarawah area near Khost, as well as Zhawar Kili al-Badr which was directed by bin Laden, and known to be a meeting place for leaders.[11][12]

The attack was made partly in an attempt to assassinate bin Laden and other leaders.[13] After the attack, the CIA heard that bin Laden had been at Zhawar Kili al-Badr but had left some hours before the missiles hit.[14]

The earlier arrest of Mohammed Odeh on August 7 while traveling to meet with Osama, is said to have alerted bin Laden, who canceled the meeting which meant that the camps targeted by the cruise missiles were mainly empty the day of the US strike.[15]

According to Pakistani journalist Ahmed Rashid, 20 Afghans, seven Pakistanis, three Yemenis, two Egyptians, one Saudi and one Turk were killed.[9] Abu Jandal later estimated that only six men had been killed in the strikes.[1] The only confirmed death in the strikes was Egyptian-Canadian Amr Hamed. Osama bin Laden jokingly told militants at the al-Jihad merger that only a few camels and chickens had died.[16]

U.S. President Bill Clinton announced the attacks in a TV address, saying the Khost camp was "one of the most active terrorist bases in the world,"[17] adding that "I want the world to understand that our actions today were not aimed against Islam" which he called "a great religion."[18]

Some people[weasel words] accused Clinton of ordering the attacks as a distraction from the Lewinsky scandal. On August 17, three days prior to the missile strike, President Clinton admitted in a nationally televised presidential address that he had an inappropriate relationship with White House intern Monica Lewinsky.[19]

On November 1st 2011, Condoleeza Rice stated these attack were targeted against Iraq and as lending legitimacy for the Iraq War during her interview segment [26] on The Daily Show. No such attacks were launched at that time.

Actually Condoleeza Rice was likely referring to Operation Desert Fox, which was a massive bombing campaign of Iraq in December 1998, and completely different from Operation Infinite Reach in August of 1998. In the interview Dr. Rice did not mention an operation code name or a month. Only that the Clinton Campaign had authorized bombing of Iraq following Clinton's signing of the Iraq Liberation Act.