Get Up (Ciara song)

Get Up (Ciara song)

Infobox Single |
Name = Get Up 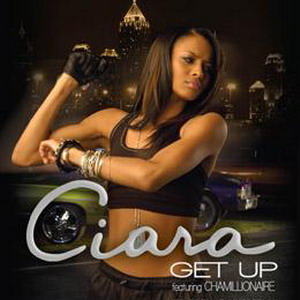 "Get Up" is a song written by American singer Ciara Harris, Hakeem Seriki, and Phalon Alexander for the soundtrack of the dance/romance film "Step Up" and Ciara's second album "". The song was released as the first single from the album in 2006 (see ) and second European single in 2007 (see ). "Get Up" includes a subtly-incorporated portion of Rockwell's 1984 single "". The up-tempo song is about the protagonist seeing a male in a club, and while they dance together they start to have intimate feelings for each other. They have never spoken but feel they have some chemistry. Chamillionaire's rap verse is lyrically a sequel to his previous single "."

Ciara also performed this song during the second season finale of 'So You Think You Can Dance'.

, director of the single's video, described its look as "black-on-black futuristic". In the video, Ciara's story line follows the singer as she goes out street dancing. When she is on the roof, the stars of "Step Up" dance together and a rain downpour begins. During this scene, the camera sweeps in and slides over Ciara's body in single-shot takes and creates an effect using macro lenses on real bodies, intermediate CGI bodies and 2-D wipes and morphs. At the end, Ciara is in her bed in the apartment. The video premiered on AOL Music on , 2006, then on both "TRL" and "" the following day. The video premiered on The Box on , . In the MTV version, the phrase "a mother" is censored.

On Ciara's official page, an official remix was released. It features new verses from Ciara and a new instrumental, also produced by . The remix contains a sample of Silk's 1993 number one hit "". The video version contains a dance break with partial chorus from the "Ciara: The Evolution" track "Get In, Fit In". In the UK, "Get Up" was re-released on , as the Kardinal Beats remix, who also remixed Ciara's singles "Oh" and "".

With its strong airplay in the U.S., "Get Up" debuted at number ninety-three on the U.S. . In its fourth week the single moved up to number seven, becoming Ciara's seventh top ten single. The song debuted at three on the and declined quickly in digital download sales. As the song began receiving mainstream radio airplay, it began to ascend the Billboard charts again.

"Get Up" became Ciara's third top five single in New Zealand. It debuted at number nine and peaked at number five its second week. It remained on the chart for eleven weeks. The song debuted in the top twenty in Switzerland and the top thirty in Germany. In the UK "Get Up" was released twice as a digital download, in 2006 and 2007. The first release was on , and made a minor appearance on the reaching number eighty-nine, however, at that time UK download only singles were not eligible for the without a physical format. This led to the second digital release on , which featured a remix Kardinal Beats.

Sides A and B on the vinyl single contain the same tracks.