In physics, damping is any effect that tends to reduce the amplitude of oscillations in an oscillatory system, particularly the harmonic oscillator.

In mechanics, friction is one such damping effect. For many purposes the frictional force Ff can be modeled as being proportional to the velocity v of the object:

where c is the viscous damping coefficient, given in units of newton seconds per meter (N s/m) or simply kilograms per second.

where ω0 is the undamped angular frequency of the oscillator and ζ is a constant called the damping ratio.

The value of the damping ratio ζ determines the behavior of the system. A damped harmonic oscillator can be:

In physics and engineering, damping may be mathematically modelled as a force synchronous with the velocity of the object but opposite in direction to it. If such force is also proportional to the velocity, as for a simple mechanical viscous damper (dashpot), the force F may be related to the velocity v by

where c is the viscous damping coefficient, given in units of newton-seconds per meter.

This force is an approximation to the friction caused by drag.

This relationship is perfectly analogous to electrical resistance as described by Ohm's law.

A mass attached to a spring and damper. The damping coefficient, usually c, is represented by B in this case. The F in the diagram denotes an external force, which this example does not include.

An ideal mass–spring–damper system with mass m, spring constant k and viscous damper of damping coefficient c is subject to an oscillatory force

and a damping force

The values can be in any consistent system of units; for example, in SI units, m in kilograms, k in newtons per meter, and c in newton-seconds per meter or kilograms per second.

Treating the mass as a free body and applying Newton's second law, the total force Ftot on the body is

where a is the acceleration of the mass and x is the displacement of the mass relative to a fixed point of reference.

This differential equation may be rearranged into

The following parameters are then defined:

Continuing, we can solve the equation by assuming a solution x such that:

where the parameter γ (gamma) is, in general, a complex number.

Substituting this assumed solution back into the differential equation gives

which is the characteristic equation.

Solving the characteristic equation will give two roots, γ+ and γ−. The solution to the differential equation is thus[1]

where A and B are determined by the initial conditions of the system: 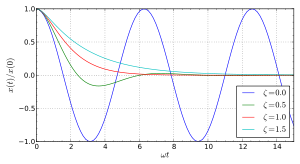 Dependence of the system behavior on the value of the damping ratio ζ, for undamped (blue), under-damped (green), critically damped (red), and over-damped (cyan) cases, for zero-velocity initial condition.

When ζ = 1, there is a double root γ (defined above), which is real. The system is said to be critically damped. A critically damped system converges to zero as fast as possible without oscillating. An example of critical damping is the door closer seen on many hinged doors in public buildings. The recoil mechanisms in most guns are also critically damped so that they return to their original position, after the recoil due to firing, in the least possible time.

where A and B are determined by the initial conditions of the system (usually the initial position and velocity of the mass):

When ζ > 1, the system is over-damped and there are two different real roots. An over-damped door-closer will take longer to close than a critically damped door would.

The solution to the motion equation is[3]:

where A and B are determined by the initial conditions of the system:

Finally, when 0 ≤ ζ < 1, γ is complex, and the system is under-damped. In this situation, the system will oscillate at the natural damped frequency ωd, which is a function of the natural frequency and the damping ratio. To continue the analogy, an underdamped door closer would close quickly, but would hit the door frame with significant velocity, or would oscillate in the case of a swinging door.

In this case, the solution can be generally written as[4]:

This "damped frequency" is not to be confused with the damped resonant frequency or peak frequency ωpeak.[6] This is the frequency at which a moderately underdamped (ζ < 1/√2) simple 2nd-order harmonic oscillator has its maximum gain (or peak transmissibility) when driven by a sinusoidal input. The frequency at which this peak occurs is given by:

For an under-damped system, the value of ζ can be found by examining the logarithm of the ratio of succeeding amplitudes of a system. This is called the logarithmic decrement.

Viscous damping models, although widely used, are not the only damping models. A wide range of models can be found in specialized literature, but one of them should be referred here: the so called "hysteretic damping model" or "structural damping model".

When a metal beam is vibrating, the internal damping can be better described by a force proportional to the displacement but in phase with the velocity. In such case, the differential equation that describes the free movement of a single-degree-of-freedom system becomes:

where h is the hysteretic damping coefficient and i denotes the imaginary unit; the presence of i is required to synchronize the damping force to the velocity (xi being in phase with the velocity). This equation is more often written as:

where η is the hysteretic damping ratio, that is, the fraction of energy lost in each cycle of the vibration.

Although requiring complex analysis to solve the equation, this model reproduces the real behaviour of many vibrating structures more closely than the viscous model.

A more general model that also requires complex analysis, the fractional model not only includes both the viscous and hysteretic models, but also allows for intermediate cases (useful for some polymers):