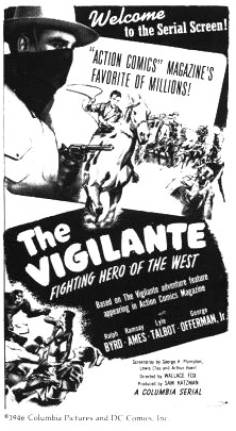 
"The Vigilante" (1947) was the 33rd serial released by . It was based on the comic book cowboy, "The Vigilante", who first appeared in "", and was starred by , well known for his central role in the Dick Tracy serials. It was his last ever serial appearance.

This serial makes the Vigilante one of the first live action adaptations of a DC Comics character, beating by one year although had already made an appearance with his own serial in 1943 (also from Columbia).

"The Vigilante", a masked government agent, is assigned to investigate the case of the "100 Tears of Blood", a cursed string of rare blood red pearls sought by a gang led by the unknown "X-1" that may have been smuggled into the country.

Greg Sanders (Saunders in the comics), in his civilian guise as an actor, is filming a western on George Pierce's ranch. Pierce is a wealthy rancher and nightclub owner. When the Prince Hamil arrives to the ranch, he gives a horse each to Saunders, Pierce, Captain Reilly, Tex Collier and Betty Winslow. But an outlaw gang soon attacks, attempting to steal all five horses. It turns out that each horse has twenty of the pearls hidden in their shoes (five in each) in secret compartments. Edging closer, Sanders learn that a prince's servant stole the diamonds from his master and smuggled them in on the horses with the intention of passing them on to "X-1".

"The Vigilante" was originally a comic book character whose first appearance was in "" (Issue #42, November 1941). He was a singing- radio performer who doubled as a motorcycle-riding crime-fighter along with a pre-teen Chinese boy, , as his answer to Batman's Robin, although Stuff ran a lot more errands than Robin, since they did not have a butler like Alfred.

In the serial version, Stuff became a white, draft-age played by George Offerman Jr., which fit with the costume changes that Columbia tagged "The Vigilante" character with a snappy-brim fedora and a catalog, white -style shirt, instead of the large flat-brimmed hat and double-button blue shirt he wore in the comic books. The nose-chin covering bandana is about all that survived the comic book to screen transfer. They also changed Greg Sanders, the Vigilante's alter-ego, from a radio troubador to a western film actor and miscast Ralph Byrd in the role as the masked government agent.

#The Vigilante Rides Again
#Mystery of the White Horses
#Double Peril!
#Desperate Flight
#In the Gorilla's Cage
#Battling the Unknown
#Midnight Rendezvous
#Blasted to Eternity
#The Fatal Flood
#Danger Ahead
#X-1 Closes In
#Danger Rides the Rails
#The Trap That Failed
#Closing In
#The Secret of the Skyroom

The Vigilante also appeared in several episodes of the animated series "" (2004-2006) voiced by . This version was truer to the original comic than the serial version, although both were motorcycle riding cowboys.