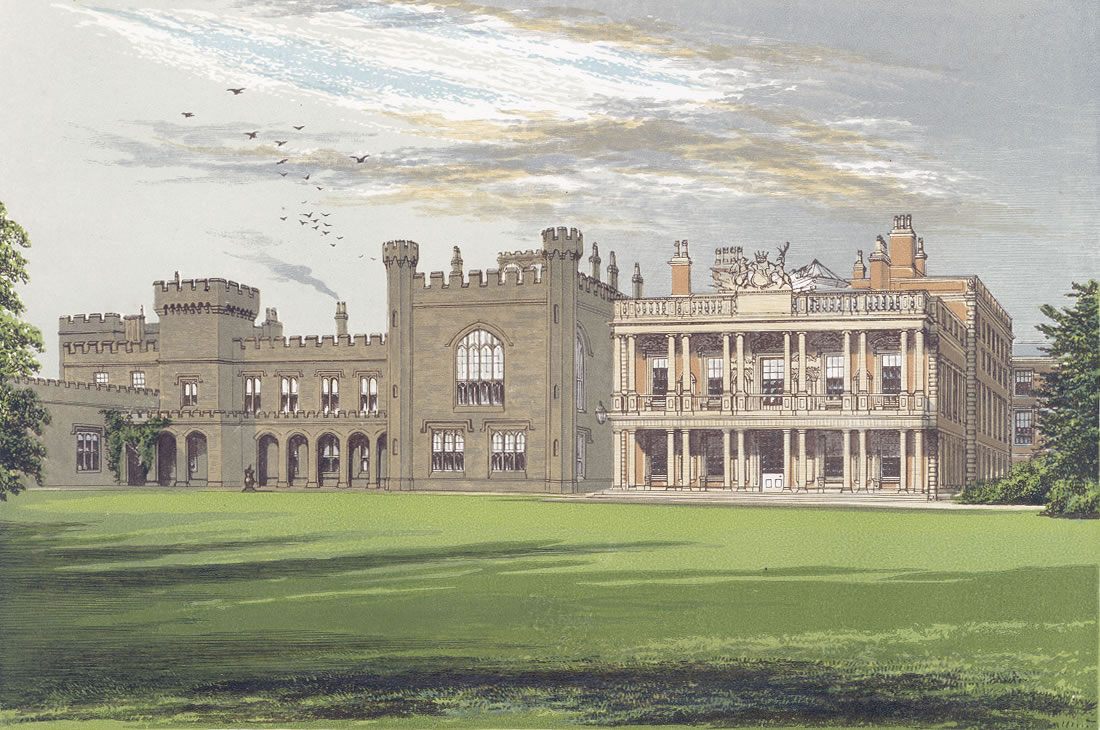 Originally Knowsley was a medieval hunting lodge in the estate of . It was inherited by the tenth Earl in 1702 who developed the lodge into a large house. A dairy (since demolished) was designed by , 1776-77. [, "A Biographical Dictionary of British Architects, 1600-1840", 3rd ed. (Yale University Press) 1995, "s.v." "Adam, Robert". Adam also designed interiors and furnishings for Derby House, London.] The house was given Gothic castellations and extended further about 1820 [Approximate date given in Colvin 1995, "s.v." "Foster, John".] to designs by John Foster, (who provided a boathouse and bridges in the park) [Colvin 1995, "s.v." "Burn, William".] and other architects. In the early 20th century it was "tidied up" by for the 17th Earl. After the Second World War, the buildings were considerably reduced by Claud Phillimore, and ceased to be lived in by the family.

Thomas Stanley was rewarded with the title of Earl Derby in 1485 by Henry VII as a reward for his support at the which led to Henry's gaining the crown. The title was taken from the area in South called (and not from the city of ). In 1495 Thomas entertained Henry VII at Lathom House and at Knowsley, which was then still a hunting lodge. [Anon. pp. 2–3.] Thomas, the second Earl, fought with Henry VIII at the Battle of the Spurs in 1513. [Anon. p. 3.] Ferdinando, the fifth Earl, was a poet and a patron of writers, including . He held the position of Earl for only one year before dying from .

Edward, the 14th Earl was a politician who became Prime Minister three times. He was responsible for steering the Slavery Abolition Act through Parliament and in his third administration the Second Reform Bill was passed.

The west side of the east wing, which faces the courtyard, has a total of 19 bays, with seven bays in a central section and six bays on each side. It consists of two storeys over a basement with an attic storey over the middle section. Above the central section is a on the summit of which is sculpture of the eagle and child (the Stanley emblem). The east face of the east wing is particularly long. At the north end are four bays in two storeys; the centre is of nine bays in 2½ storeys; and at the south end are 16 bays, also in 2½ storeys but one storey lower because the land falls away to the south. At the south end of the east wing is a "handsome" two-storey, five-bay stone " or " with paired Doric columns on the lower storey and paired fluted Ionic columns above. The east wing then jumps back with six bays facing west until it joins the south wing. [Pevsner and Pollard, pp. 218–220.]

This section describes mainly the rooms which are normally open to the public. The Entrance Hall is panelled in carved oak and is hung with early 18th-century paintings of the house and the park.

This consists of an area of approximately AcreAndHectare |2500| round=0 surrounded by a stone wall convert|9.5|mi|km|0 long. The park was landscaped in the 1770s by "Capability" Brown, who flooded a AcreAndHectare |62| round=0 lake to feed the water-gardens around the hall.

The park contains a number of buildings. These include the New House which was built for the 18th Earl and his family, by Phillimore in 1963 in Neo-Georgian style, the stables to the north of the hall which were designed by William Burn in the 1840s, the Boathouse of 1837, also by William Burn, The Nest, Home Farm, and a number of lodges. [Pevsner and Pollard, pp. 222–223.]