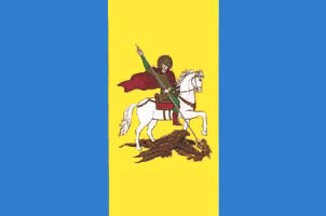 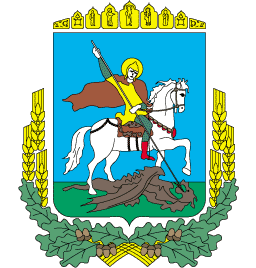 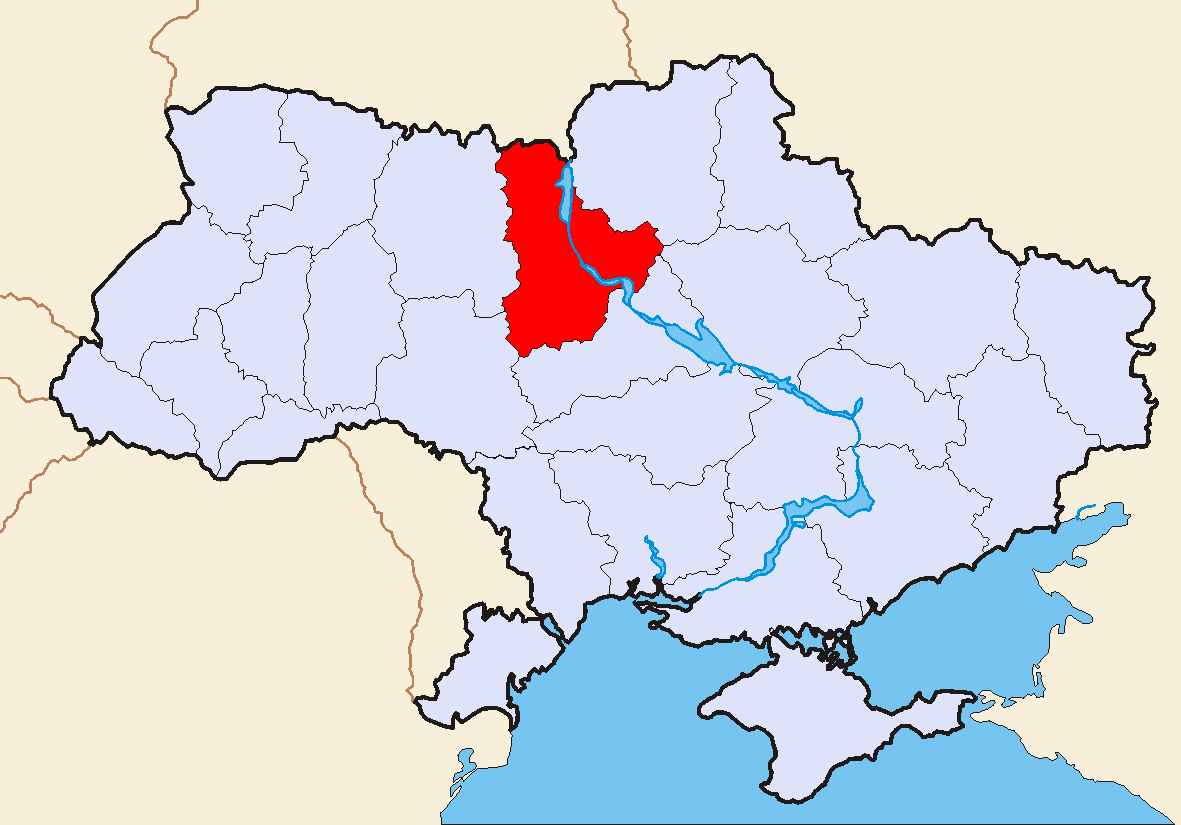 The administrative center of the oblast is the city of ( _uk. Київ, "Kyiv"), also being the capital of Ukraine. Despite being located in the center of the Kiev Oblast, and hosting the governing bodies of the oblast, Kiev itself is a self-governing city with special status and not under oblast jurisdiction.

The current Head of the Kiev Oblast State Administration is .

Kiev Oblast has a total area of 28,100 km² (approximately 35 times the area of Kiev city) and is located in north-central Ukraine. On the west it borders the , on the Southwest — , on the South — , on the Southeast - , on the East and Northeast — , and on the North — Homyel Voblasts of .

The oblast is equally split between the both banks of ("Dnipro") north and south of Kiev. Other significant rivers in the oblast are the Dnieper's tributaries: Pripyat ("Prypiat") (R), Desna (L), Teteriv (R), Irpin' (R), Ros' (R) and (L).

The length of the Dnipro River within the boundaries of the oblast totals 246 km. The oblast has a total number of 177 rivers intersecting the region; 13 reservoirs (the most notable ones being and the ), over 2000 ponds, and approximately 750 small lakes.

The climate of Kiev Oblast is characteristic of the area and other neighboring forested areas. The oblast has a moderately with relatively mild Winters and warm Summers. The temperatures range from -6.1 °C in January to 19.2 °C degrees in July.

Kiev Oblast has small mountains and slopes on the right bank of the Dnieper River. This entire area is surrounded by a continuous belt by greenery and forests. The oblast's "green area" covers 436 square kilometers, characterized by 250 different sorts of trees and bushes.

Kiev Oblast was officially created as part of the on , .

The current borders of the oblast were last set following the in 1986. Administrative oversight of the new city of , which was constructed as part of the , was then transferred to the Kiev Oblast ("see Chornobyl zone below").

The oblast is subdivided into 25 ("administrative districts"). It consists of 25 cities, 30 towns, and more than 1,000 villages.

The following data incorporates the number of each type of administrative divisions of Kiev Oblast:

Similarly, the town of , which is located within the borders of Kiev city (which is itself surrounded by the Kiev Oblast), officially belongs to the Kiev Oblast.

The north-western end of the oblast is a part of the due to the caused by the Chernobyl ("Chornobyl") nuclear reactor accident. The largest cities within zone are and Prypiat, which are now abandoned ("see s"). The city of was built outside of the zone to host evacuated residents of Prypyat and personnel of the zone installations.

Important cities and towns of Kiev Oblast include:

Kiev Oblast has a highly-developed rail transport system. The total length of the oblast's working rairoad lines is 88 km (as of 1985). Through the territory of the oblast pass the: —Kiev—, Kiev—— and other railroad routes. In addition to inter-Ukraine and international rail routes, local Elektrychka lines also pass through the oblast: Kiev—Fastiv—Koziatyn, Kiev—Fastiv—Myronivka, Kiev—Teteriv, Kiev—Nizhyn, and Kiev—Yahotyn.

The oblast's main airports include two international airports: the and the Gostomel (Antonov) Cargo Airport. Ukrainian military airbases are located in the cities of and .

Most of Ukraine's oblasts are named after their cities, officially referred to as "oblast centers". The name of each oblast is a , formed by adding a feminine to the name of respective center city: Kiev ("Kyiv") is the center of the "Kyivs’ka oblast"' (Kiev Oblast). Most oblasts are also sometimes referred to in a feminine noun form, following the convention of traditional regional place names, ending with the suffix "-shchyna", as is the case with the Kiev Oblast, "Kyivshchyna".

Kiev is the traditional English name for the administrative center of the Kiev Oblast, but the Ukrainianized versions (transliterated from the Ukrainian language) "Kyiv" and "Kyiv Oblast" are sometimes also used.

* [http://www.kmu.gov.ua/control/en/publish/article?art_id=301241&cat_id=32596 Information Card of the Region] - Official site of the Cabinet of Ministers of Ukraine