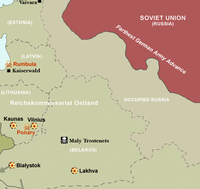 Maly Trostenets and major ghettos in Reichskommissariat Ostland. The camp is marked with a white and black skull

Originally built in the summer of 1941, on the site of a Soviet kolkhoz, as a concentration camp, to house Soviet prisoners of war who had been captured following the German attack on the Soviet Union which commenced on June 22 of that year; (it was known as Operation Barbarossa). The camp became a Vernichtungslager, or extermination camp, on May 10, 1942 when the first consignment of Jews arrived. While many Jews from Germany, Austria and the present-day Czech Republic met their deaths there, (in most cases almost immediately upon their arrival, by being trucked to the nearby Blagovshchina (Благовщина) and Shashkovka (Шашковка) forests killing grounds and shot in the back of the neck), the primary purpose of the camp was the extermination of the substantial Jewish community of Minsk and the surrounding area. Mobile gas chambers deployed here performed a subsidiary if not insignificant function in the genocidal process.

On June 28, 1944, as the Red Army approached the region, the Nazis blew the camp up in an attempt to obliterate evidence of its existence, conforming with the aims of the so‑called Aktion 1005. But the Soviets are said to have discovered 34 grave‑pits, some (not all) measuring as much as 50 meters in length and three to four meters in depth, located in the Blagovshchina Forest some 500 meters from the Minsk–Mogilev highway, at about the 11th‑kilometer mark (according to the special report prepared by the Soviet Extraordinary State Commission in the 1940s). Other than the possible exception that the Soviets may have found a few unidentified jewish prisoners that previously escaped, no survivors of the camp are known to exist. Original estimates of the number of people killed there ranged from 200,000 to more than half a million. Yad Vashem currently estimates the number as 65,000 Jews[1] Signage on the site indicates 206,000 were murdered there.

The site is scheduled for reconstruction and development. Currently nothing remains of the camp other than a row of poplars planted by the inmates as part of the border of the camp.

A memorial, built at the site of the camp, attracts thousands of visitors annually, especially since the dissolution of the Soviet Union has eased travel restrictions.

Victims of the camp