The Blue Wildebeest (Connochaetes taurinus), also called the Common Wildebeest, is a large antelope and one of two species of wildebeest. It grows to 115–145 cm shoulder height and attains a body mass of 168–274 kg.[2] They range the open plains, bushveld and dry woodlands of Southern and East Africa, living for more than twenty years. The male is highly territorial, using scent markings and other devices to protect his domain. The largest population is in the Serengeti, numbering over one million animals.

The name “Blue Wildebeest” derives from a conspicuous silvery blue sheen[3] to its short haired hide, differentiating this species from the plainer black genus member Black Wildebeest. The name "gnu" originates from the Khoikhoi name for these animals, "gnou". 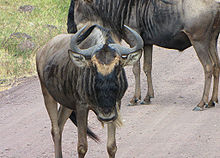 The animal's specific name taurinus is Latin for "like a bull".

It has a beefy muscular front-heavy appearance with a distinctive robust muzzle, it strides with relatively slender legs and moves gracefully and quietly most of the time, belying the reputation for stampeding in herds; however the stampeding characteristic may sometimes be observed. 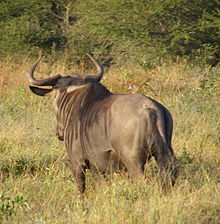 Probably the most conspicuous feature of the Blue Wildebeest are the large horns shaped like parentheses, extending outward to the side and then curving up and inward. In the male the horns can attain a total span of almost 90 cm, while the female's horn width is about half the size of the male. These cow-like horns of both sexes are somewhat broad at the base and are without ridges. However, as further sexual dimorphism, the male horns have a boss-like structure joining the two horns. The male is larger than the female with a total body length of up to 2.5 m.

Young Blue Wildebeest are born tawny brown, and begin to take on their adult colouration at age nine weeks. The adult's hue actually varies from a deep slate or bluish gray all the way to light gray or even grayish-brown. The dorsal coat and flanks are slightly lighter in hue than the ventral hide and underparts. Dark brown vertical bands of slightly longer hair mark the neck and forequarters, and from a distance lend a perception of skin wrinkling. The manes of both sexes appear long, stiff, thick and jet black, a colour assumed by the tail and face as well. Sexual dichromism is exhibited by the males displaying decidedly darker colouration than the females. All features and markings of this species are bilaterally symmetric for both sexes.

Wildebeest drinking and grazing with zebras.

Blue Wildebeest are found in open and bush-covered savanna in south and east Africa, thriving in areas that are neither too wet nor too arid. They can be found in places that vary from overgrazed areas with dense bush to open woodland floodplains. Wildebeests prefer the bushveld and grasslands of the southern savanna.[4] The terrestrial biome designations for these preferred habitats are savanna, grassland, open forest and scrub forest.

Large herds numbering into the thousands may be observed on the Tanzanian Serengeti equatorial plain, and in Zambia in Liuwa Plain National Park, in their annual migration. Smaller herds of about thirty are found in northern Botswana, Zimbabwe[5] and the South African locations of Waterberg, Kruger National Park, and Mala Mala. Some herds can be found almost to the southern tip of South Africa.

Blue Wildebeests can tolerate arid regions, as long as a potable water supply is available. Since all Wildebeests require a long drink every day or two, they must have water within about 15 to 25 km distance. Their blunt muzzles are best equipped for biting short green grasses,[3] since a wide incisor row prevents more selective feeding. Short grasses of these type are usually only found on alkaline or volcanic soils. Blue Wildebeests are a favorite prey item to lions, spotted hyenas, and Nile crocodiles. The latter stalk them at river crossings. The young also fall prey to cheetahs, leopards, and wild dogs. 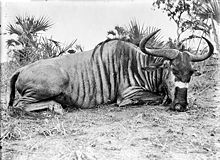 The Serengeti boasts over one million Blue Wildebeests, but Southern Africa's large herds have diminished over the last several centuries under pressure from hunting, cattle ranching and habitat intrusion stemming from overpopulation of humans. In southern Africa some efforts are being made to enhance grasslands and repair damage of cattle grazing and excessive fencing. These activities are particularly evident in the Waterberg Biosphere, where invasive brush (induced by excess cattle grazing) is being extirpated and many fences are coming down to promote wildlife migration.[6] While the species status is considered secure as a whole, there is concern for smaller herds in the southern Africa habitats which have already become marginalized. 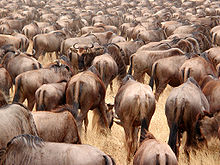 A herd of wildebeest in the Ngorongoro Crater. The leader in the center is watching the others.

The Serengeti herds are purely migratory and abandon the usual plains after the rainy season has ended to seek higher grasses in wetter areas. Grasslands bordering alkaline lakes or pans are particularly choice dry season (winter) habitats.[2] Herds may be mixed gender with a dominant male, female only, or bachelor only. Blue Wildebeest often graze together with other species such as plains zebras for purposes of mutual protection. Zebras in particular are beneficial to co-exist with since they mow down highly vegetated areas leaving the wildebeests to eat the newly exposed and more nutritional short grasses, which is what they prefer. A Blue Wildebeest can attain maximum a speed of up to 80 kilometres per hour (50 mph).[7]

Blue Wildebeest are unusually territorial, adult males occupying their territories for a month or for the entire year. The physical size of territories ranges from one to two hectares. The bulls mark territory boundaries with dung heaps, preorbital gland secretions, hoof scent glands and pawing of the earth. When competing over territory, males grunt quite loudly, make a thrusting motion with their horns and perform other displays of aggression.

Territories are advertised by actions of the bull as well as scent marking.[3] Body language used by the territorial male include standing at an erect posture, profuse ground pawing and horning, frequent defecation, rolling on his back and bellowing the sound "ga-noo".[3] To attract the opposite sex at the beginning of courtship the male (and less frequently the female) will rub its preorbital gland on a tree and then proceed with a destructive horning of said tree. This behaviour is not only effective in enticing a mate, but serves the function of providing more grassland for future Wildebeest generations by promoting grassland extent. 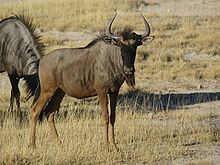 Adult with a calf in the Ngorongoro Crater, Tanzania

Blue Wildebeests at the waterhole in the Etosha National Park, Namibia

Males exhibit rivalry when staking out territory and when competing for females. In the actual clashes between males, they face off resting on bent front knees, exchanging horn thrusts for brief periods. Elaborate individual displays are made in the rivalry and courtship process, where males bellow, snort and protrude their horns into the soil. The mating process is thought to begin at the first full moon at the end of the rainy season. Once territory is established, the male attempts to lure or corral the female into his domain.[8] A female may copulate with several different males, visiting several different territories.[8] Most mating occurs during a three to four week period at the end of the rainy season (March to April), when this species is at its maximum vigour.[8]

The female reaches sexual maturity at age three, and the male at age four; however, it is more typically age five when the male has developed sufficient strength and experience to defend territory. Generally fewer than half of the adult males create territories in a given year. In the Serengeti, population densities are so high that there may be 270 territorial bulls within one square kilometer. Estes terms the total volume of noise created during the Serengeti rutting season as “indescribable” in its amplitude and variety of snorting, bellowing and fighting.[2] When the dry season is well underway about August, territories cease to exist.

Female wildebeest give birth in the middle of a herd rather than go out alone.[8] The gestation period is approximately 8.5 months, with calves able to stand within seven minutes and run with the herd in less than two hours from birth. These precocial features are warranted since the calves are vulnerable to predators. To escape predation calves remain close to the mother for a significant time, and in fact may suckle for up to one year. In large herds 80 percent of Wildebeest offspring survive the first month, compared to a 50 percent survival rate within small herds.

C. taurinus consists of five subspecies: C. t. taurinus (Blue Wildebeest or Brindled Gnu; southsouthern Africa) individuals are silvery slate gray in colour, the origin of the common name "blue" wildebeest. C. t. johnstoni (Nyassaland Wildebeest), occurring in southerneastern Tanzania and northern Mozambique), is the largest subspecies. The Western White-bearded Wildebeest (C. t. mearnsi) is the smallest and is found only in southwestern Kenya and northwestern Tanzania. C. t. mearnsi is the darkest hued wildebeest while C. t. albojubatus (Eastern White-bearded Wildebeest) is the palest in colouration and found in southeastern Kenya and northeastern Tanzania. The last subspecies, Cookson's Wildebeest (C. t. cooksoni), is restricted to the Luangwa Valley.[9] While most subspecies have an at least partially black beard, C. t. mearnsi and C. t. albojubatus both have pale beards, as also suggested by their common names, Western and Eastern White-bearded Wilderbeest.