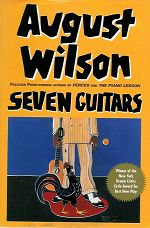 "Seven Guitars" is a 1995 play by American , . It focuses on seven African American characters in the year 1948. The play begins and ends after the funeral of one of the main characters, showing events leading to the funeral in flashbacks. "Seven Guitars" represents the 1940s entry in Wilson's "Pittsburgh Cycle", a decade-by-decade anthology of African-American life in during the twentieth century; Wilson would revisit the stories of some of these characters in "", set in the 1980s.

A song Floyd "Schoolboy" Barton recorded, called "That's All Right", in the prior year has become a radio hit. Record executives have asked him to return to Chicago to record more albums. Since the recording of the first album, Floyd has squandered the flat fee he received for recording, left his girlfriend (Vera) for another woman, was then left by the other woman, pawned his guitar, and spent ninety days in jail after being arrested while walking home from his mother's funeral. After a year of trials and tribulations, Floyd is ready to right the past year's wrongs and return to Chicago with a new understanding of what's important in his life. Unfortunately his means of righting wrongs are inherently flawed.

The play's recurring theme is the African-American male's fight for his own humanity, self-understanding and self-acceptance in the face of personal and societal ills. The rooster is a recurring symbol of black man throughout the play, and provides a violent and shocking foreshadowing affect when Hedley delivers a fiery monologue and ritualistically slaughters one in front of the other characters.