The Witches of Eastwick (film)

The Witches of Eastwick (film) 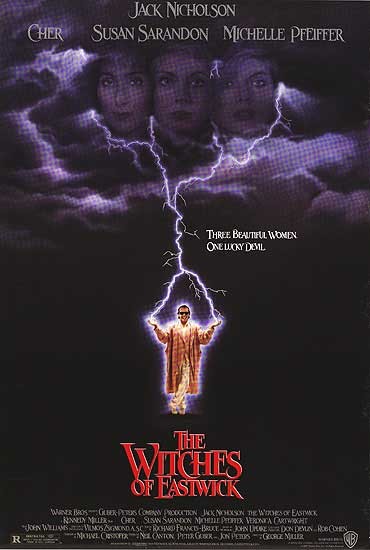 The story, set in the town of Eastwick, is based around the magical abilities and personal growth of the three female s (the Alexandra Medford, Jane Spofford, and Sukie Ridgemont). Initially their power is minor, but expands to involve the summoning of a -like character Darryl Van Horne. The mysterious Darryl seduces each of the women in turn so he can have children before he dies, teaching them how to further their powers and creating a scandal in the town. The women come to realize that Darryl is corrupting them and the town, and resolve to exile him from their lives.

Differences between the novel and the film

While the movie portrays a very romantic view of the witches—the way they act and the things they make happen in Eastwick during the plot, and charges most of the guilt on Darryl—the book shows a more cruel and evil set of witches, mostly oriented to having affairs with the men in town and hurting other women with their spells. The book is also charged with sexual content, compared to the movie. And yet, although the weight of guilt is also dispersed among the witches, Darryl still keeps enough of it to end the book being even more villainous and evil than his movie counterpart. In addition, the film is set in a fictional Massachusetts town, while the novel is set in a fictional Rhode Island town of the same name.

In the song "All Turns White" by the band , dialogue from the film can be heard.

In the Bloopers Reel of Disk 2 in Command and Conquer 3 Tiberium Wars: Kane Edition, Joe Kucan accidentally says "witches" instead of "riches" and makes a reference to The Witches of Eastwick: "I have shown you the Witches... of Eastwick, a good movie starring Jack Nicholson".

In the episode "The Turtle and the Hare" of the TV Show the four main protagonists are attending a wedding and Carrie said that they were like the Witches of Eastwick.