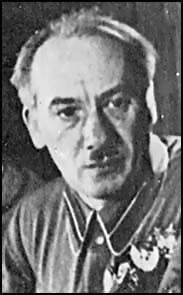 Yagoda was born in in a Jewish [See Zvi Gitelman. "A Century of Ambivalence: The Jews of Russia and the Soviet Union, 1881 to the Present", 2nd expanded edition, Indiana University Press, 1988, 2001, ISBN 0-253-21418-1 , p.112] family, and joined the in 1907. After the of 1917, he rose through the ranks of the "" (the NKVD's predecessor), becoming 's second deputy in September 1923. After Dzerzhinsky's death in July 1926, Yagoda became deputy chairman under . Due to Menzhinsky's serious illness, Yagoda was in effective control of the secret police in the late 1920s. In 1931, Yagoda was demoted to second deputy chairman. On , , two months after Menzhinsky's death, appointed Yagoda " for Internal Affairs," a position that included oversight of regular as well as secret police.

Yagoda was notorious for his love of gambling and womanizing. [ See Simon Sebag Montefiore. "Stalin: the Court of the Red Tsar", Knopf, 2004, ISBN 1-4000-4230-5] When eventually arrested, pornographic material including photographs and films was found in his house. [ [http://www.gulag.ipvnews.org ГУЛАГ - с фотокамерой по лагерям ] ] He may have been involved with the murder of his superior Menzhinsky, whom he was later accused of poisoning, and , who was assassinated in December 1934Fact|date=September 2007.

Yagoda oversaw the interrogation process leading to the first Moscow Show Trial and subsequent execution of former Soviet leaders and in August 1936, an important milestone in Stalin's . Yagoda was one of the founders of the concentration camp system in which more than 2 million Russians have perished. [ See Aleksandr I. Solzhenitsyn. The Gulag Archipelago Vol I-IV, Harper & Row, 1973] However, on , 1936 he was replaced by , who oversaw the height of the purges in 1937-1938. In March 1937, Yagoda was arrested. He was found guilty of and conspiracy against the Soviet government at the in March 1938. Solzhenitsyn describes Yagoda as trusting in deliverance from Stalin even during the show trial itself:

:Just as though Stalin had been sitting right there in the hall, Yagoda confidently and insistently begged him directly for mercy: "I appeal to you! "For you" I built two great canals!" And a witness reports that at just that moment a match flared in the shadows behind a window on the second floor of the hall, apparently behind a muslin curtain, and, while it lasted, the outline of a pipe could be seen. [See Aleksandr I. Solzhenitsyn. "The Gulag Archipelago" Vol I-II, Harper & Row, 1973, ISBN 0-06-013914-5]

Yagoda was shortly after the trial.

, also Russian by birth, attributed the following conversation to Yagoda during his last days at the Lubyanka prison before his execution. When asked by his interrogator if he believed in God, Yagoda replied, "From Stalin I deserved nothing but gratitude for my faithful service; from God I deserved the most severe punishment for having violated his commandments thousands of times. Now look where I am and judge for yourself: is there a God, or not..." [See "Yagoda in his Prison Cell," in Alexander Orlov "The Secret History of Stalin's Crimes", Knopf, 1953.]