Bejeweled
This article is about the first game in the series. For an overview of the whole series, see Bejeweled (series).

Bejeweled is a puzzle game by PopCap Games, first developed for browsers in 2001. Three follow-ups to this game have been released. More than 75 million copies of Bejeweled have been sold, and the game has been downloaded more than 500 million times.[3]

The game was initially created by PopCap Games as a web-based Flash game called Diamond Mine, inspired by the gameplay of Shariki. It was reportedly successful for PopCap—a company formed in 2000. PopCap created partnerships with established Internet gaming sites such as Microsoft Zone to host Bejeweled as well. The name Bejeweled was suggested by Microsoft, who thought that the original name Diamond Mine was too similar to that of an existing game, Diamond Mines.

The game has also been ported to other platforms, including Microsoft Windows, where it was called Bejeweled Deluxe. Astraware produced versions for PDAs on the Palm OS, Windows Mobile, Smartphone and Palm platforms. They also released Bejeweled Deluxe on the Xbox as a downloadable Xbox Live Arcade game. On September 12, 2006, it was released as one of the first games downloadable from the iTunes Store for the Apple iPod.[citation needed] 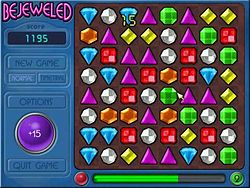 The objective of this game is to swap one gem with an adjacent gem to form a horizontal or vertical chain of three or more gems. Bonus points are given when more than three identical gems are formed or forms two lines of identical gems in one swap. Gems disappear when chains are formed and gems fall from the top to fill in gaps. Sometimes chain reactions, called cascades, are triggered, where chains are formed by the falling gems. Cascades are awarded with bonus points. There are two variations of the game to choose from.