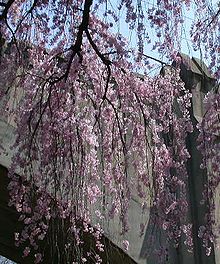 Branch Brook Park is a county park of Essex County, New Jersey in the United States, located in the North Ward of Newark, between the neighborhoods of Forest Hill and Roseville. At 360 acres (1.5 km²), Branch Brook Park is the largest public park in the city of Newark. The park is noted for having over 4,000 cherry blossom trees in more than fourteen different varieties,[citation needed] collectively called Cherryblossomland, as well as its spectacular Cherry Blossom Festival each April.

The park was formally created in 1895 by the newly-created Essex County Parks Commission, making it the nation's first county park. The area had served as an Army training ground during the American Civil War. At the time, the northern portion of the area had been a marsh known as Old Blue Jay Swamp. In 1898, a public appropriation financed the conversion of the swamp into a landscaped lake. The initial park was only 60 acres (0.2 km²) in size but grew in the 1920s through private donations from prominent Newark families, such as the Ballantines, eventually reaching the city limit with Belleville and becoming one of the largest urban parks in the United States. The Morris Canal originally ran on the park's west side, until its old bed was turned into the Newark City Subway, providing access to the park from Downtown Newark.

The first designs of the park, based largely on romantic garden themes, were proposed in 1895 and 1898, after the Parks Commission hired several architectural firms to plan the park. In 1900, the commission hired the firm of Frederick Law Olmsted to redesign the park. The result was the park's current naturalistic look and feel, with acres of meadows and forests, in a manner similar to Olmsted's earlier designs of Central Park and Prospect Park. 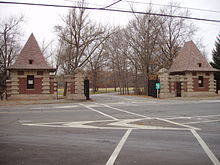 The Ballantine gates, on the east side of the park by Forest Hill, were given to Branch Brook Park by Peter Ballantine in 1899. They are modeled on gates in Scotland

The famous cherry trees were the result of a 1927 gift from Caroline Bamberger Fuld, sister of department store magnate Louis Bamberger and widow of the store's vice president. The Cherry Blossom Festival attracts approximately 10,000 visitors each April.

During World War II, the park's grounds served a tent city for recruits, as well as a landing strip for airplanes of the United States Postal Service.

It has been placed on both the New Jersey (1980) and National (1981) Registers of Historic Places.

Branch Brook Park is currently in the midst of $25 million, ten-year, restoration program. In 2004, the Park Avenue bridge was repaired, as were the ballfields in the center of the park. a 2007 plan provide for more than 5,000 cherry trees in the park and a renovation and renaming of the Welcome Center, using to a $650,000 grant from the Essex County Recreation and Open Space Trust Fund in 2006 and private donations.[1]