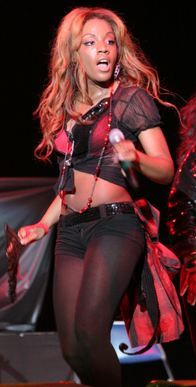 She was born in . She is currently living in due to being displaced after . Music has played an influential part in her life since early childhood. Her father is Frank Richard, former lead singer and percussionist of the popular Funk/Soul band Chocolate Milk. Her mother owned a dancing school where Dawn spent much of her childhood developing her skills at choreography and singing. Aside from music, Richard was a high school national basketball champion, as well as a state bowling champion at De La Salle High school. She was a top-notch student, and attended the , majoring in art, under a full academic scholarship.

Early on in her teenage life, Richard began performing with a local New Orleans group called "Realiti," before following her instincts and going solo under the name "Dawn Angeliqué." With help from her family and friends she released a solo album called "." Although it had no releases and did not chart, it was still good enough to secure her a spot as the opening act for Anthony Hamilton. Briefly leaving music behind, she focused on dance, becoming an NBA dancer for the while attending university.

Her big break came when, in 2005, Richard auditioned for the MTV show "Making the Band 3" in Orlando, where she was chosen to compete for a spot in Diddy's future girl-group. She beat out numerous contestants to secured herself a spot, along with , , Wanita Woodgette (now known as ""), and in the newly formed musical group, which would soon be called .

The idea for the name of the group came from one of Richard's drawing. An avid fan of , while Danity Kane was in the studio, Richard drew a female superhero which caught the attention of Diddy. When asked what the character's name was she replied "Danity Kane," and to Diddy this represented the girls of "Making the Band 3". He then decided that it should be the name of the group. The name and story were first introduced during Danity Kane's appearance on June 14th, 2006

Richard has also remixed a song with London-based artist Cherri V, whose title is "Fast Car." The song has since become one of the most listened to songs on Cherri V's myspace.

Early 2008, a song called "Phase" was leaked onto the internet and featured . Although it was buzzed as a track, only Richard's voice was featured on the song, leaving speculation that it was a solo demo. July 2008, 2 new tracks were released onto the internet, one called "Rush Love" which featured , and another track called "Strobe Light". It is still unknown if this was part of a future solo endeavor.

During a MTV News break, it was stated that Richard is working on an untitled comic book.

, , and were aired together on the second season of "Making the Band 4". The series showed the two groups doing performances, living together, and the relationships between members of the bands. During the series it showed Richard's relationship with Day26's grow. The close friendship blossomed into something more and the two shared a kiss in one of the episodes.

On the live season finale, when Sway, reporter and executive producer for MTV News, asked the two about their relationship, the two said they wanted to "claim" each other, making their relationship official. Since then, Richard and Mosley have been seen together in various public places such as nightclubs and industry parties. In addition, Richard has made a cameo in 's Music Video "Since You've Been Gone" appearing as Mosley's love interest and Mosley returned the favor by appearing in 's video for "Bad Girl."