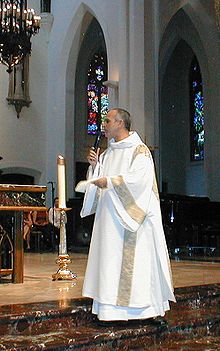 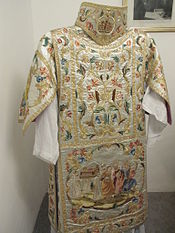 Ornately embroidered dalmatic (shown from the back with an appareled amice)

The dalmatic is a long wide-sleeved tunic, which serves as a liturgical vestment in the Roman Catholic, Lutheran, Anglican, and United Methodist Churches, which is sometimes worn by a deacon at the Mass or other services. Although infrequent, it may also be worn by bishops above the alb and below the chasuble. Like the chasuble worn by priests and bishops, it is an outer vestment and is supposed to match the liturgical colors of the day.

A dalmatic is also worn by the British monarch during the coronation ceremony.

Historically, the dalmatic was a garment of Byzantine dress, and was adopted by Emperor Paul I of the Russian Empire as a coronation and liturgical vestment. In Orthodox icons of Jesus Christ as King and Great High Priest he is shown in a dalmatic.[1]

It was a normal item of clothing at the time when ecclesiastical clothes began to develop separately around the fourth century, worn over a longer tunic by the upper classes, and as the longest part of the dress of men of lower rank.

The dalmatic is a robe with wide sleeves; it reaches to at least the knees or lower. In 18th Century vestment fashion, it is customary to slit the under side of the sleeves so that the dalmatic becomes a mantle like a scapular with an opening for the head and two square pieces of the material falling from the shoulder over the upper arm. Modern dalmatics tend to be longer and have closed sleeves, with the sides being open below the sleeve. The distinctive ornamentation of the vestment consists of two vertical stripes running from the shoulder to the hem; according to Roman usage these stripes are narrow and sometimes united at the bottom by two narrow cross-stripes. Outside of Rome the vertical stripes are quite broad and the cross-piece is on the upper part of the garment. At a Pontifical High Mass, a dalmatic (usually made of lighter material) is worn by the bishop under the chasuble. At solemn papal liturgical occasions the Pope is assisted by two Cardinal-Deacons vested in a dalmatic and wearing a mitra simplex (simple white mitre).

In the Roman Catholic Church the subdeacons wore a vestment called the tunicle which was originally distinct from a dalmatic but by the 17th century the two became identical, though a tunicle was often less ornamented than a dalmatic, the main difference often being only one horizontal stripe versus the two becoming a deacon's vestment. Additionally, unlike deacons, subdeacons do not wear a stole under their tunicle. Today, the tunicle is rare in the Roman Catholic Church as only certain authorized clerical societies (such as the Priestly Fraternity of St. Peter) have subdeacons.

Traditionally the dalmatic was not used in the Roman rite by deacons during Lent. In its place, depending on the point in the liturgy, was worn either a folded chasuble or what was called a broad stole, which represented a rolled-up chasuble. This tradition went back to a time at which the dalmatic was still considered an essential secular garment and thus not appropriate to be worn during the penitential season of Lent.

In the Eastern Orthodox Churches and Eastern Catholic Churches, there are two vestments very similar to the dalmatic. The first is the sticharion worn as the outer vestment by subdeacons and deacons and servers and as an undergarment by priests and bishops, strictly speaking, corresponding to a Western Alb. The second is the sakkos, which is more elaborately decorated and more amply cut, worn as an outer vestment by the bishops, derived from Byzantine imperial dress, and hence identical in origin to the Western Dalmatic.