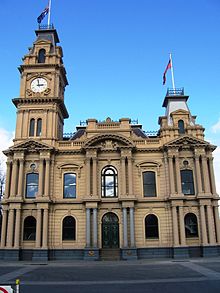 The City of Greater Bendigo is a Local Government Area in Victoria, Australia. It is located in the central-western part of the state. It has an area of 3,048 square kilometres. In 2001 it had a population of 87,000.

It was formed in 1994 when the former City of Bendigo, Borough of Eaglehawk and Shires of Strathfieldsaye, Huntly, Marong and later Shire of McIvor amalgamated under State Government reforms.

The main meeting centre of the council is the Bendigo Town Hall on Lyttleton Terrace which was built in stages starting in 1859 and extended in 1883-85, however the council also operates several facilities in and around Central Bendigo.

Wards are named after present and past localities within the City.

Each ward is represented by one elected Councillor. [2]