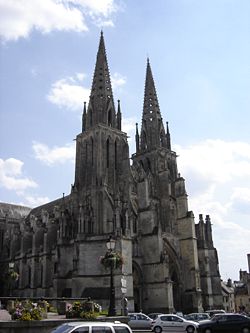 Cathedral church of Our Lady of Séez

The Roman Catholic Diocese of Séez, (Lat: Dioecesis Sagiensis) is a diocese, of the Latin Rite of the Roman Catholic church in France. Originally established in the 3rd century, the diocese encompasses the department of Orne, in the Region of Basse-Normandie. The episcopal see is the cathedral in Sées,[1] and the diocese is a suffragan of the Archdiocese of Rouen.

The diocese is currently a vacant see (sede vacante).

Saint Ebrulf, a native of the Diocese of Bayeux, founded, after 560, several monasteries in the diocese of Séez; one of them became the important Abbey of Saint-Martin-de-Séez, which, owing to the influence of Richelieu, its administrator-general, was reformed in 1636 by the Benedictines of Saint-Maur. Rotrou II, Count of Perche, in fulfillment of a vow, established in 1122, at Soligny, the Abbey of La Trappe, in favour of which Bulls were issued by popes Eugene III (1147), Alexander III (1173) and Innocent III (1203), and which was reformed in 1662 by Abbot Amand Jean le Bouthillier de Rancé.

During the French Revolution the Trappists went with Dom Augustin de Lestranges, 26 April, 1791, into Switzerland, where they founded the convent of La Val Saint, but returned to Soligny soon after the accession of Louis XVII. Among the abbots of the Trappists monastery at Soligny were: Cardinal Jean du Bellay, who held a number of bishoprics and resigned his abbatial dignity in 1538; the historian Dom Gervaise, superior of the abbey from 1696-8.

On the occasion of the St Bartholomew's Day massacre in 1572 Matignon, leader of the Catholics, succeeded in saving the lives of the Protestants at Alençon. The cathedral of Séez dates from the twelfth century; that of Alençon was begun in the fourteenth.

The diocese was re-established by the Concordat of 1802, which, by adding to it some parishes of the dioceses of Bayeux, Lisieux, Le Mans and Chartres, and by cutting off some districts formerly included in it, made it exactly coextensive with the department. It is suffragan to the Archdiocese of Rouen in Normandy.

In 1884 Monseigneur Buguet, curé of Montligeon chapel, founded an expiatory society for the abandoned souls in Purgatory, since erected by pope Leo XIII into a Prima Primaria archconfraternity, which publishes six bulletins in different languages and has members in every part of the world. Notre Dame de la Chapelle Montligeon is also a place of pilgrimage. The Grande Trappe of Soligny still exists in the Diocese of Séez, which before the application of the law of 1901 against religious congregations had different teaching congregations of brothers, in addition to the Redemptorists. Among the congregations of nuns originating in the diocese may be mentioned: the Sisters of Providence, a teaching and nursing institute founded in 1683 with mother-house at Séez; the Sisters of Christian Education, established in 1817 by Abbé Lafosse, mother-house at Argentan, and a branch of the order at Farnborough in England; the Sisters of Mercy, founded in 1818 by Abbé Bazin to nurse the sick in their own homes.

Some saints were especially venerated in this diocese. These included Ravennus and Rasyphus, martyred in the diocese about the beginning of the third century. Saint Céronne (d. about 490) founded two monasteries of nuns near Mortagne; and Saint Cenerius, or Céneri (d. about 669), born at Spoleto, was the founder of the monastery of Saint Cenerius. Saint Opportuna, sister of Saint Chrodegang[3], and her aunt, Saint Lanthilda, were abbesses of the two monasteries of Almenèches (end of the seventh or beginning of the eighth century). Saint Evremond (d. about 720) was the founder of the monasteries of Fontenay les Louvets and Montmevrey. Saint Osmund, Bishop of Salisbury (d. 1099), as Comte de Séez, followed William the Conqueror into England.