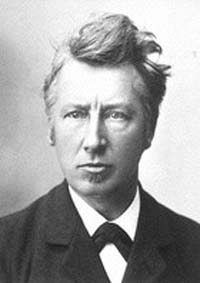 Jacobus Henricus van 't Hoff (, &ndash; , ) was a Dutch physical and organic chemist and the winner of the inaugural . His research on , , and is credited to be his major work. Van 't Hoff helped to found the discipline of as we know it today.

He was born in , Netherlands, the son of a medical doctor. From a young age he was interested in science and nature; he frequently took part in botanical excursions, and his receptiveness for philosophy and his predilection for poetry were already apparent in his early school years. ( was his idol.)Against the wishes of his father, he went to study , first at the Delft Polytechnic Institute, then at the , then to , (where he studied with Friedrich Kekulé), then (where he studied with C. A. Wurtz), finally receiving his doctorate at the University of Utrecht in 1874.In 1878 van 't Hoff married Johanna Francina Mees. They had two daughters, Johanna Francina (b. 1880) and Aleida Jacoba (b. 1882), and two sons, Jacobus Hendricus (b. 1883) and Govert Jacob (b. 1889).

Before receiving his doctorate, van 't Hoff had already published the first of his important contributions to . In 1874 he accounted for the phenomenon of by assuming that the s between s and their neighbors were directed towards the corners of a regular . This three-dimensional structure perfectly accounted for the s found in nature (). He shares credit for this idea with the French chemist , who independently came up with the same idea.

Van 't Hoff published his work on the geometry of science in his book "La chimie dans l'éspace" in 1874. At the time, his theory was considered an extraordinary claim in science, and was criticized strongly by the scientific community. One such critic was the renown editor of the German "Journal für praktische Chemie", Adolf Kolbe, who stated:

"A Dr. H. van ’t Hoff of the Veterinary School at Utrecht has no liking, apparently, for exact chemical investigation. He has considered it more comfortable to mount Pegasus (apparently borrowed from the Veterinary School) and to proclaim in his "‘La chimie dans l’espace’" how the atoms appear to him to be arranged in space, when he is on the chemical Mt. Parnassus which he has reached by bold fly."

However, van 't Hoff's work was revolutionary, and became indispensable in science.

In 1884 van 't Hoff published his research on chemical kinetics, naming it "Études de Dynamique chimique" ("Studies in Chemical Dynamics"), in which he described a new method for determining the order of a reaction using , and applied the laws of to chemical equilibria. He also introduced the modern concept of chemical affinity. In 1886 he showed a similarity between the behaviour of dilute solutions and gases. Until 1895 he worked on 's theory of the dissociation of . On 1896 he became professor to the "Prussian Academy of Science" at . His studies of the salt deposits at contributed to Prussia's chemical industry. In 1887 he and German chemist founded an influential scientific magazine named "Zeitschrift für physikalische Chemie" "("Journal of Physical Chemistry")".

The Nobel Prize in Chemistry

Van 't Hoff became a lecturer in chemistry and physics at the Veterinary College in Utrecht. He then became a professor of , , and at the for almost 18 years before eventually becoming the chairman of the chemistry department. In 1896 van 't Hoff moved to where he finished his career at the in 1911. In 1901 he received the first for his work with s. This can generally be summarized by stating that very dilute solutions follow mathematical laws that closely resemble the laws describing the behavior of es.

In 1885 he was appointed member of the Royal Netherlands Academy of Sciences. Other distinctions included the honorary doctorates of Harvard and Yale 1901, Victoria University, Manchester 1903, Heidelberg 1908; the Davy Medal of the Royal Society 1893 (along with Le Bel), Helmholtz Medal of the Prussian Academy of Sciences 1911; he was also appointed Chevalier de la Légion d'honneur 1894, Senator der Kaiser-Wilhelm-Gesellschaft (1911). Van 't Hoff was also honorary member of the British Chemical Society in London, the Royal Academy of Sciences, in 1892, American Chemical Society 1898, and the Académie des Sciences, in Paris 1905.

He was indeed a prominent scientist of its time. Of his numerous distinctions, he regarded his winning of the first Nobel Prize in Chemistry as the culmination of his career.