D'Ken Neramani is a fictional character in the Marvel Comics universe. He is best known for being the evil brother to both Lilandra and Cal'syee (the villain Deathbird), two important characters in the X-Men franchise.

D'Ken first appeared in X-Men v1 #97 (February 1976), and was created by Chris Claremont and Dave Cockrum.

D'Ken inherited the throne of the interstellar Shi'ar Empire after his older sister, Deathbird, was exiled for murdering their mother and an unnamed younger sister. The Shi'ar's first known contact with Terrans is during D'Ken's reign. On Earth for an unknown reason, a Shi'ar scout ship encounters the private plane of Chris Summers (later known as Corsair). Also aboard are a pregnant Katherine Anne Summers and their children, future X-Men members Cyclops and Havok. The Shi'ar ship attacks the plane and kidnaps Corsair and Katherine. Their two sons are forced to share an escape parachute. Unfortunately, both parties come to believe the other has died.[volume & issue needed]

Brought to the Shi'ar Empire, D'Ken initially imprisons Corsair and takes Katherine to his royal bedchambers where he attempts to rape Katherine. As Corsair makes an unsuccessful attempt to escape from his holding pen, D'Ken punishes him by making Corsair watch as D'Ken stabs and kills Katherine. D'Ken then rips their unborn child from her womb. Corsair is made a slave while D'Ken keeps the infant alive with Shi'ar technology that also accelerates his growth. The third Summers' son, Vulcan is raised a slave and is sent back to Earth to be a servant to Erik the Red. Vulcan is able to escape and find refuge with Moira MacTaggert.[volume & issue needed]

Meanwhile, D'Ken seeks to expand the Shi'ar Empire and gain more power through finding and using the legendary M'Kraan Crystal. Ignoring others' concerns, he eventually located the Crystal, placed on an abandoned planet, known only as The World. D'Ken's sister Lilandra Neramani opposes him, knowing that the Crystal was nicknamed "The End of All That Is" for a reason. She attempts a coup but is marked a traitor. While fleeing D'Ken's forces, Lilandra accidentally becomes psychically linked with Charles Xavier following his mental defeat of a Z'Nox invasion. Lilandra makes her way to Earth and allies herself with the X-Men. D'Ken's forces capture Lilandra and return with her, via Stargate, to The World to witness D'Ken's attempt to use the Crystal's power. The X-Men quickly pursue.[volume & issue needed]

The X-Men arrive on The World and face off against D'Ken's Imperial Guard. Luckily, they are joined and assisted by the Starjammers, who had been attempting their own sabotage of D'Ken rule. The Phoenix Force, still weakened and unexperienced in using the new host body of Jean Grey, flies to the crystal to try to stop D'Ken, but is sucked into it, with everyone else. Inside the crystal, they find a large endless city, at the center of which is the heart of the Crystal - a sphere which contained a Neutron Galaxy. Due to its intense gravity, the Neutron Galaxy could cause all of creation to be sucked into it. Normally, an energy field in the form of a latticework, acted as a living shield but it was deteriorating due to the breach. Unfortunately, nearly all of those sucked into the Crystal are rendered immobile by a ray coming out of the orb that causes everyone to live out their greatest nightmares. Only Phoenix is unaffected. Using the empathic link she forges with the crystal, Phoenix discovers the imminent danger. Phoenix attempts to use her vast psychic powers to repair the latticework on her own but finds that even she is not strong enough. Phoenix reaches out telepathically to her fellow X-Men for psychic and spiritual support. With their combined will, Phoenix is able to repair the Crystal and save the universe from ultimate destruction. While most of those drawn into the crystal are able to escape unscathed, D'Ken experiences it's nightmarish effects more intensely and its immense power renders him comatose for a very long time. With D'Ken out of the picture, his younger sister Lilandra became the ruler of the Shi'ar.[volume & issue needed]

Rise and Fall of the Shiar Empire

Vulcan, reawakens after barely surviving the failed rescue of the original X-Men from Krakoa. Driven mad by the experience and recalling the horrors of his past, Vulcan swears revenge on all those that he feels have wronged him, including D'Ken and the Shi'ar Empire. Vulcan heads back into outer space. While Vulcan is eventually captured by the Imperial Guard, he escapes when rebel Shi'ar against Lilandra's rule attempt to release fellow prisoner, Deathbird. While on the run, the two former prisoners become romantically involved. Vulcan plans to resume his goal of vengeance, but Deathbird manages to convince him to delay his plans for a while. They travel to the planet where it is revealed that a comatose D'Ken has been protected and treated. Several telepaths have attempted to undo the damage that Crystal had done to D'Ken's mind. All were unsuccessful and were either killed by the experience themselves or also left mindless. The most recent attempts, however, show that D'Ken's mind is almost functioning, only that the neural pathways are not connecting properly. As a favor to Deathbird, who did not want to rule the empire but did want to overthrow her sister, Vulcan offers to use his powers to assist the healing process. Knowing of Vulcan's enmity for the former Shi'ar ruler, the others are concerned but Vulcan assures them that his vengeance means little to someone in D'Ken's current state.[1] Vulcan succeeds in redirecting energy and jumpstarts D'Ken's mind.[volume & issue needed]

D'Ken is grudingly grateful to Vulcan for reviving him. After he observes that Deathbird and Vulcan are romantically involved, D'Ken believes that bringing Vulcan into the family will help control the volatile situation. Due to Vulcan's "birth" in the royal house, D'Ken is able to invoking an ancient Shi'ar law that allows Vulcan to marry Deathbird and become part of the Shi'Ar royalty. Vulcan agrees, but, following the completion of the wedding ceremony, Vulcan kills D'Ken, saying that since he and Deathbird were now married, he could claim the Shi'ar throne as his own "By right of blood and combat! By right of succession!" [2]

It should also be noted that D'Ken was at one point believed to have some connection to the mysterious Adam X, a human-Shi'ar hybrid whom, according to Davan Shakari, was fathered by D'Ken and Katherine Summers, which led fans to believe he was the so-called Third Summers brother. With the revelation that Katherine was pregnant with Vulcan at the time D'Ken abducted her and the fact that he killed her soon after ripping Vulcan out of her womb, the Adam X scenereo remains conjecture.[volume & issue needed] 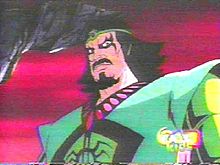 D'Ken from X-Men: The Animated Series

D'Ken was seen in the third season of the X-Men (1992 Animated Series), in the five episode series Phoenix Saga, where his history was very similar to that of the comics. He was also responsible for the abduction of Cyclops's parents with Cyclops becoming an orphan on Earth. He also killed Cyclops's mother and imprisoned his father. D'Ken gained control over the M'Kraan Crystal in the series, however, which gave him overwhelming powers that drove him completely insane. When D'Ken was fighting Lilandra, the X-Men, and the Imperial Guard, D'Ken was eventually trapped by the Phoenix inside the M'Kraan crystal itself, in control of its vast power but unable to escape it.

D'Ken is mentioned in the game Marvel: Ultimate Alliance.[citation needed]